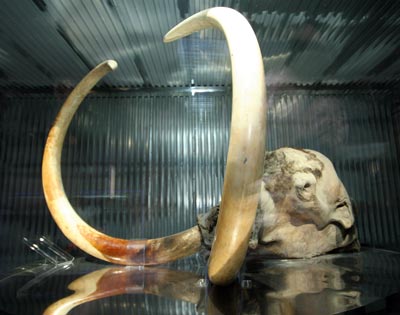 A frozen mammoth discovered in the permafrost zone in Siberia is displayed at Global House March 18, 2005 in Nagakute, Japan.
Koichi Kamoshida/Getty Images

Besides using DNA from insects trapped in amber, there are several theories about how scientists might clone dinosaurs. One involves finding DNA specimens in fossilized bones instead of in the bodies of insects. The problem with this idea is that DNA is a complex, delicate structure. The process of fossilization involves replacing the organic tissue in an animal's bones with minerals. This effectively destroys the cells that may contain DNA.

However, one team of paleontologists has discovered what appears to be soft tissue in the bones of a Tyrannosaurus rex. It was a discovery no one could have predicted -- until that point, scientists thought all soft tissue was destroyed in the fossil process. However, the research team has not yet isolated any DNA from the soft-tissue samples. While the discovery doesn't necessarily guarantee that researchers will ever find intact DNA in fossils, it makes the idea more likely than it was just a few years ago.

Another appealing idea is that researchers could sequence the DNA of dinosaurs and recreate the necessary DNA strands. At this point, this isn't possible. The sequencing of the human genome, for example, took 13 years to complete, and the final product wasn't something researchers could use to clone people. Reconstructing complete strands of dinosaur DNA would require technology far beyond what exists today.

That leaves what may be the next best thing to cloning dinosaurs -- cloning extinct mammals, like mammoths. Mammoth fossils are significantly younger than dinosaur fossils. They're only about 30,000 years old. This difference in age gives the DNA much less time to decompose. But a mammoth cloning project would still require a perfectly preserved specimen. The mammoth's tissue couldn't have gone through cycles of freezing and thawing or been preserved at extremely low temperatures that could damage the DNA. Yet, the idea of piecing together this evidence to get an idea of mammoth genes isn't completely unreasonable. In 2005, one research team reported that it had sequenced part of the mammoth genome.

A second option for bringing mammals to life could be to use fossilized sperm to inseminate the eggs of a related mammal. The resulting animal would be a hybrid, with only half its genetic code from its male mammoth parent. A project to do exactly that was proposed by a Japanese research team in 2006 [source: Times Online].

These advances in paleontology and genetic technology have made the idea of cloning dinosaurs just a little more probable sometime in the far future. But it's still not at all likely, especially not in our lifetimes.

Want to learn more about cloning, dinosaurs and other topics? You'll find lots of information below.