Keep Your Junk out of the Pacific Ocean Trash Vortex 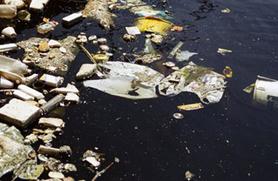 It might sound like something out of an apocalyptic science fiction film, but I assure you—the Pacific Island Trash Vortex is very real indeed. It's essentially a huge carpet of garbage big enough to fill two Texases that's floating around due north of Hawaii. Still skeptical? Here's videographic proof of the Trash Vortex on the G Word. And here's a Greenpeace animation detailing the trash's path.

Okay, so there's a massive continent made of refuse floating around in the ocean. So what do we do about it? Let's not contribute to it, for starters. And while we should be doing our damnedest to keep trash out every body of water period, keeping your junk out of the following bodies of water will directly prevent your waste from joining to the world's most unfortunate fast-growing nation.

Where the Path to the Great Pacific Trash Vortex Begins:

1. The Pacific Ocean: Duh. When you're at the beach on the West Coast, make sure to properly dispose of your trash. Scan your towel-zone for any tidbits you may have left behind?unless you want to plan a visit to the open ocean to go see them again.

2. Rivers that feed into the Pacific: Again, it's not rocket science. Keep your local rivers clean to stop the trash flow.

3. The toilet bowl: It's not exactly a body of water per se, but keep your non-biodegradable junk out of there too—trash has a nasty way of finding its way out of the sanitation systems and bleeding into local ecosystems, including rivers.

More on the Pacific Trash Vortex:

Mexico's Giant Crystal Cave Is Beautiful But Deadly
Antarctic Ice Shelf Melting From the Inside Out, Which Is Not a Good Thing
Are Mist and Fog the Same?