by Stell Simonton Oct 8, 2018
This iceberg in Antarctica flipped, most likely because of ice melt due to warming temperatures. Will Ng/HowStuffWorks/YouTube Screen Shot

Icebergs — those floating peaks that dot the North Atlantic, Antarctic and other waters — seem pretty stable. After all, nine-tenths of their bulk is underwater, leaving only the tip visible.

But every now and then an iceberg will tumble over. Even enormous ones the size of cities, with peaks hundreds of feet tall, have flipped.

Icebergs are born when a chunk of ice breaks off from a glacier, an ice shelf or another iceberg. Ice shelves, for example, form in cold areas such as Greenland when the edge of a glacier flows over the land and floats in the water, making the ice subject to cracking.

The most likely time for an iceberg to topple is in its infancy. When a chunk breaks away, we say the glacier, shelf or iceberg has calved. After splitting away from the parent, the big icy babies may be irregularly shaped. They tip and roll as gravity pulls most of their weight underwater.

In other cases, melting ice can destabilize an iceberg. Because fresh water is much less dense than salt water, and because icebergs are generally formed from fresh water, their weight distribution changes as they melt.

Burton said that climate change is causing more icebergs to flip, but it's rare for people to actually witness the phenomenon.

Flipped-over icebergs can look quite different from the snow-capped peaks that we normally imagine when we think of icebergs. Filmmaker Alex Cornell saw a flipped iceberg that looked like a large blue-green jewel, according to Smithsonian magazine. The ice was likely very old and very dense from long-time compression. Such compression forces out the small air pockets that make ice look white. The ice then absorbs some red light, making the reflected light appear blue to our eyes.

Now That's Interesting
To truly qualify as an iceberg, a chuck of floating ice must be greater than 16 feet (4.9 meters) above sea level, the thickness must be 98-164 feet (30-50 meters) and the ice must cover an area of at least 5,382 square feet (500 square meters). The smaller chunks of ice you might see floating in arctic waters are known as “bergy bits” and “growlers.”

Contrary to Popular Opinion, Cats Are No Good at Catching Rats 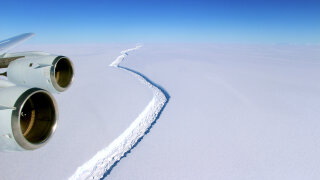 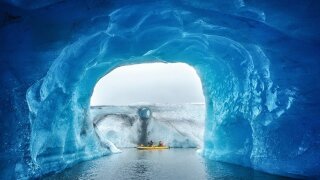 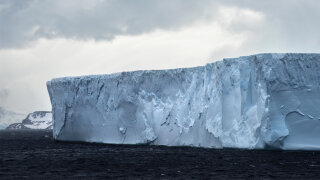