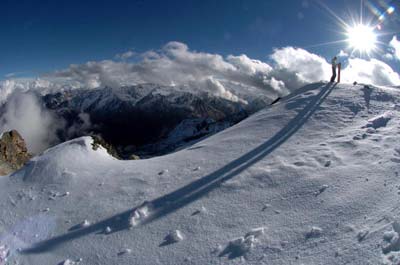 Glaciers are the largest ­moving objects on earth. They're massive rivers of ice that form in areas where more snow falls each winter than melts each summer. Their scale is truly gargantuan -- the glaciers that form the ice cap covering Greenland hold enough ice to encase the entire Earth to a depth of 17 feet [source: Gallant]. The glaciers of Antarctica are so heavy they actually change the shape of the planet. And, perhaps most importantly, three quarters of the world's total supply of freshwater is frozen in glaciers [source: NSIDC].

The inexorable force of glaciers carves out lakes, grinds down mountains, scatters strange rock formations across the countryside and reduces solid rock to fine dust. Glacial meltwaters created the most spectacular floods in our planet's history. Some glaciers dam rivers, creating lakes behind them. Some form over dormant volcanoes -- if they eventually erupt, hot magma explodes through solid ice and torrents of meltwater roar down mountainsides. There's a good chance that the landscape you live on today was shaped by glaciers thousands of years ago, during so-called ice ages when glaciers covered three times as much area as they do now.

Today, scientists look to glaciers as a measuring stick for global warming. Receding glaciers provide stark visual evidence of a warming Earth. Widespread glacial melting would cause a catastrophic rise in sea levels that would fundamentally alter the planet and wreak havoc on human civilization.

We're going to find out how these massive ice slabs form, where you can find them and how they shape the land they rest on. We'll also take a close look at reports that the world's glaciers are shrinking, and find out what that means for our future.

Most glaciers move just millimeters each year. The world's fastest glacier isn't timed with a stopwatch. You need a calendar. The Jakobshavn Glacier in Greenland spent many years moving between 5,700 and 6,700 meters per year. In the last decade, it has more than doubled its speed, zipping down the slope at 12,600 meters per year, or just short of eight miles per year [source: NASA].

Sometimes glaciers surge -- they move up to 10 times faster than their usual speed. This happens most often in the spring, when melting causes enormous volumes of water to flow through and under the glacier.

But why did the Jakobshavn Glacier speed up? Scientists think it happened because the glacier got thinner. Once a glacier starts basal slipping, the lighter it gets, the faster it moves -- less weight pressing down on the ground equals less friction.