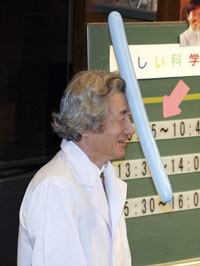 Japanese Prime Minister Junichiro Koizumi laughs as a balloon clings to him with a static electrical charge. ­
Junko Kimura/Getty Images

The invention of the battery -- which could produce a continuous flow of current -- made possible the development of the first electric circuits. Alessandro Volta invented the first battery, the voltaic pile, in 1800. The very first circuits used a battery and electrodes immersed in a container of water. The flow of current through the water produced hydrogen and oxygen.

The first widespread application of electric circuits for practical use was for electric lighting. Shortly after Thomas Edison invented his incandescent light bulb, he sought practical applications for it by developing an entire power generation and distribution system. The first such system in the United States was the Pearl Street Station in downtown Manhattan. It provided a few square blocks of the city with electric power, primarily for illumination.

One classification of circuits has to do with the nature of the current flow. The earliest circuits were battery-powered, which made in a steady, constant current that always flowed in the same direction. This is direct current, or DC. The use of DC continued through the time of the first electric power systems. A major problem with the DC system was that power stations could serve an area of only about a square mile because of power loss in the wires.

In 1883, engineers proposed harnessing the tremendous hydroelectric power potential of Niagara Falls to supply the needs of Buffalo, N.Y. Although this power would ultimately go beyond Buffalo to New York City and even farther, there was an initial problem with distance. Buffalo was only 16 miles from Niagara Falls, but the idea was unworkable -- until Nikola Tesla made it possible, as we'll see on the next page.