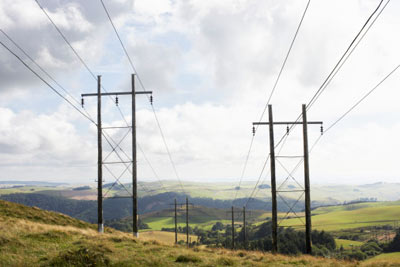 Engineer Nikola Tesla, aided by theoretical work by Charles Proteus Steinmetz, came up with the idea of using alternating current, or AC. Unlike direct current, AC is always changing and repeatedly reverses direction.

So why was AC the answer to the problem of long-distance power transmission? With AC, it's possible to use transformers to change voltage levels in a circuit. Transformers work on a principle of magnetic induction, which requires a changing magnetic field produced by the alternating current. With transformers, voltages can be increased for long-distance transmission. At the receiving end, the voltage level can decrease to a safer 220V or 110V for business and residential use.

We need high voltages for long distances because wire resistance causes power loss. The electrons bumping into atoms lose energy in the form of heat as they travel. This power loss is proportional to the square of the amount of current moving through the wire.

To measure the amount of power the line transmits, you can multiply the voltage by the current. You can express these two ideas using an equation in which I represents current, V represents voltage and P equals power:

Let's consider the example of transmitting 1 megawatt. If we increase the voltage from 100V to 10,000V, we can then decrease the current from 10,000A to 100A. This will reduce the power loss by (100)2, or 10,000. This was Tesla's concept, and from that idea power transmission from Niagara Falls to Buffalo, and ultimately to New York City and beyond, became a reality.

Electronic circuits need both AC and DC. We'll learn about them on the next page.

Thomas Edison was a brilliant and intuitive inventor. However, his limited schooling, especially in mathematics, kept him from a true understanding of the theory behind AC electricity. He understood DC well enough, but AC was, strangely, a bit beyond his grasp. He strongly opposed the idea of using AC for long-distance power transmission, but AC gradually replaced DC as the primary means of electric power transmission.