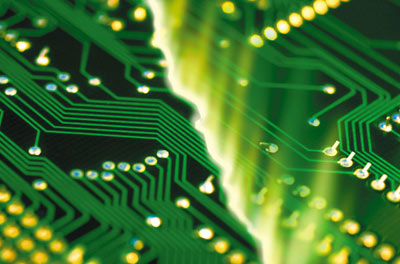 You've probably heard these terms before. You knew they had something to do with electricity, but maybe you weren't sure quite sure how.

The blood flowing through your body doesn't get a free ride. The walls of the blood vessels impede the flow, and the smaller the blood vessel, the more the resistance to flow. Some of the pressure produced by your heart is just for pushing blood through blood vessels. As electrons move through wires, they bump into atoms. This impedes the flow of the electrons. The wire offers resistance to the flow of the current. The amount of resistance depends on the material, diameter and length of the wire. The resistance increases as the diameter of the wire decreases. Resistance is in units of ohms (Ω).

Electric circuits are composed of wires and other components -- like light bulbs, transistors, computer chips and motors. Wires, made of metals called conductors that have a low resistance to current, connect the components. Copper and aluminum are the most common conductors. Gold, because of its resistance to corrosion, is often used for attaching wires to tiny electronic chips.

­In an incandescent bulb, the current flows through a thin tungsten wire or a metallic filament that offers high resistance to current flow. When the electrons bump into the atoms, the friction, or loss of kinetic energy, produces heat. If the temperature of the filament is high enough, it starts to glow and give off light. This is incandescence. Typical filament temperatures for light bulbs are around 4,600 degrees F (2,550 degrees C). Unfortunately, 90 to 95 percent of the energy supplied to a light bulb is lost in the form of heat rather than light, so incandescent bulbs are very inefficient.­

Fluorescent lights produce light by having electrons pass through a tube filled with mercury vapor and neon or argon gas. As the electrons bump into the mercury atoms, they cause electrons in the atoms to absorb some of their energy. As these electrons return to their normal state, they radiate bundles of light energy called photons. Fluorescent lights are four to five times more efficient than incandescent bulbs.