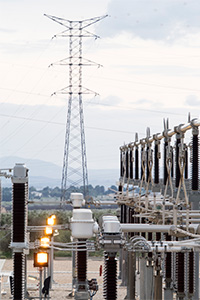 The place where electricity converts from "transmission" to "distribution" occurs is in a power substation.
Jose A. Bernat Bacete/Getty Images

For power to be useful in a home or business, it comes off the transmission grid and is stepped-down to the distribution grid. This may happen in several phases. The place where the conversion from "transmission" to "distribution" occurs is in a power substation. A power substation typically does two or three things:

At the bus, there may be two separate sets of distribution lines at two different voltages. Smaller transformers attached to the bus step the power down to standard line voltage (usually 7,200 volts) for one set of lines, while power leaves in the other direction at the higher voltage of the main transformer.

The next time you are driving down the road, you can look at the power lines in a completely different light. On a typical utility pole, the three wires at the top of the poles are the three wires for the 3-phase power. The fourth wire lower on the poles is the ground wire. In some cases there will be additional wires, typically phone, cable TV or Internet lines riding on the same poles.

Lines that carry higher voltage will need to be stepped down further before entering residential buildings and most businesses. This often happens at another substation or in small transformers somewhere down the line. For example, you will often see a large green box (perhaps 6 feet or 1.8 meters on a side) near the entrance to a subdivision. It is performing the step-down function for the subdivision.