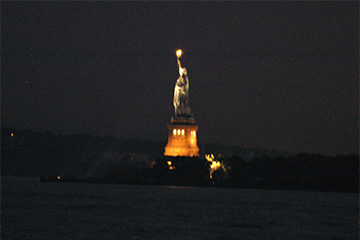 The Statue of Liberty was one of the few structures not affected by the enormous blackout of 2003 that crippled New York City and nearby regions.
Jason Nevader/WireImage/Getty Images

Just after 4 p.m. on Aug. 14, 2003, a huge swath of the eastern U.S. and Canada went dark. The massive 2003 blackout affected 50 million people across eight U.S. states and the Canadian province of Ontario. Power in some areas wasn't restored for two days [source: USCPSOTF].

If one power plant goes down, or one high-voltage transmission line is cut, or one generator fails, then other units must pick up the slack. Usually this isn't a problem. But when demand for electricity is high — as it was on that hot August afternoon in 2003 — isolated failures in the grid can trigger a cascade of breakdowns leading to millions of people going without power.

The cause of the 2003 blackout was a combination of human error, computer malfunctions and overgrown trees near power lines. It started with a few generators going offline in Northern Ohio because of mechanical trouble. The load was shifted to nearby generators, but overgrown trees made contact with overhead power lines, causing those lines to trip. Utility companies in the region didn't have adequate monitoring systems in place, so workers failed recognize the severity of the situation before generators across the region became overloaded and shut down [source: USCPSOTF].

Like a circuit breaker, components of a power grid can "trip" and shut off when a load is dangerously high. The result is that the load is passed on to other parts of the grid network, which may also shut down, creating a domino effect that leads to a blackout.

While human error and computer malfunctions can be remedied, there's not much utility companies can do about bad weather. Severe weather — high winds, lightning strikes, heavy snowfall — is the No. 1 cause of power outages in America [source: DOE].

The next time you drive down the road and look at the power lines, or the next time you flip on a light, you'll hopefully have a much better understanding of what is going on. The power distribution grid is truly an incredible system.