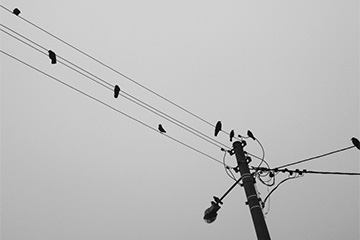 Birds perch on a power line. Notice that there are three wires coming from the pole.
Mateusz Cybart /Eyeem/Getty Images

You will also find regulator banks located along the line, either underground or in the air. Above-ground regulator banks look like three garbage can-sized transformers held up by two utility poles. They regulate the voltage on the line to prevent undervoltage and overvoltage conditions. The regulator bank works to maintain a steady 7,200 volts running through the neighborhood on three wires (with a fourth ground wire lower on the pole).

Most homes and businesses only need single-phase power, so typically you will see three wires running down a main road, and taps running off on side streets. The taps on utility poles can be configured to deliver single-phase or two-phase power to residences and commercial buildings.