How the Tesla Powerwall Works 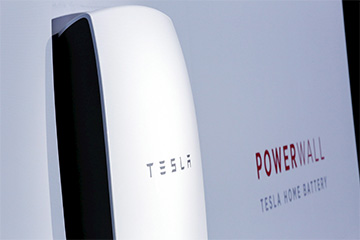 The Tesla Powerwall is unveiled on April 30, 2015.
© Patrick T. Fallon/Reuters/Corbis

In April 2015, Tesla Motors sparked a high-tension-wire buzz among solar power users and utility industry wonks by announcing its entry into the home and industrial battery market. The company would offer two home batteries, a 7 kilowatt-hour Powerwall for daily use ($3,000) and a10 kwh version for backup power ($3,500), as well as a scalable 400 kwh commercial/utility battery for large buildings [source: CNN].

Within the first week, the company had piled up 38,000 reservations for Powerwalls and 2,500 orders for larger power packs [sources: Geuss; Randall]. Powering the buzz was the hope that Tesla's new products might jump-start consumer's flagging interest in solar self-storage by rebalancing the cash-per-kilowatt equation in favor of banked energy.

Reaching that tipping point is essential to solar's future. Although solar technology has made great strides, its chief drawback remains the same: Solar cells must harvest energy while the sun shines. That means until we start parking solar panels in space and beaming power back to Earth, solar users must spend their nights hooking to the grid, consuming generator power or re-enacting pioneer days. Ideally, they could store the day's solar energy to "self-consume" at night, but the batteries currently on the market leave something to be desired.

Mainly, they're too expensive. Costs can reach as high as $600 per kwh of storage, with $100 per kwh marking a kind of industry sound barrier. To put that in perspective, the average American household uses around 30 kwh per day. As of March 2015, the average residential cost for drinking from the grid clocked in at 12.35 cents per kwh, or about $3.71 per day [sources: USEIA; USEIA].

Like the rechargeable batteries in your camera or cell phone, these energy cells can only recharge so many times before they degrade. That gives current household and industrial batteries a life span of around 3-10 years and keeps battery costs high [sources: Aziz; NMSEA]. Many American solar users, both residential and commercial, find that simply selling excess energy to the power grid during the day and buying it back at night pays better [sources: Galbraith; Geuss; NMSEA]. But to the green-minded, this swap, which barters green energy for fossil fuel power, is a vexing devil's bargain.

If the Powerwall gives hope to some solar consumers that a better bargain is in the offing, then it also energizes Tesla's future prospects, both in the automotive and energy markets. To drive down costs for the Tesla Motors side of the business, which currently loses $15,000 per Model S sold, the company needs to get into the battery business in a big way [source: Helman]. A larger demand for Tesla Energy battery technology, some of it built on the same battery backbone as the Model S, could help fund essential factory and R&D facilities. The resulting economies of scale could transform the solar battery market as well.

But not everyone is convinced that the hype is justified, at least not yet.

© 2015 HowStuffWorks, a division of Infospace LLC