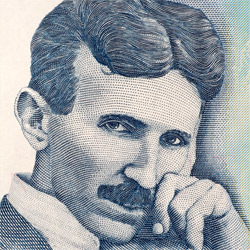 One sign that you've made it: Your mug is immortalized on currency. In this case, it's a note for 100 Serbian dinars, equivalent to about $1 in 2012.
iStockphoto/ThinkStock

History, they say, is written by the victors, but that's cold comfort to the men and women x-ed out by the editor's pen. For years, science textbooks equated electricity and light with one man, Thomas Edison, while the genius whose pioneering electrical technologies truly power the modern world languished as a minor note in scientific history, sandwiched between Edward Teller and Thales of Miletus.

Before the turn of the 20th century, electricity remained a mere scientific curiosity -- one that many doubted would ever do an honest day's work. Nikola Tesla, arguably more than anyone else, changed that, but his pioneering research in electricity represents only a portion of the scientific and technical innovations that elevated him to science godhood.

Tesla not only expanded and revolutionized the work of his predecessors; he also leapfrogged ahead of his contemporaries to the next step, and the next. But, just as it takes more than groundbreaking music to give rise to a rock god, we think it takes more than innovative breakthroughs and amazing machines to make a scientific one. We'd argue that such a figure must also possess intriguing facets -- qualities like eccentricity, vision and the will to suffer for science. Nikola Tesla was such a man.