by Mark Boyer
Prev NEXT
1 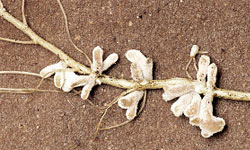 Many plants, like soybean, can't fix nitrogen, so they depend on the rhizobium bacteria, which is found in the roots of the plant, to fix atmospheric nitrogen and make it available to the plant.
Inga Spence/Getty Images

If you think the relationship between the oxpecker and water buffalo is complicated, wait until you take a look at the dirt beneath your feet. By definition, a parasite is something that gets nourishment, or in some other way benefits, at the expense of its host. But sometimes the relationship can be mutually beneficial.

Earlier in this article we looked at the ways in which farmers employ parasitic wasps and other insects to be their foot soldiers in the battle against unwanted insects. But many farmers are similarly dependant on certain of types of fungi, yeasts and molds, many of which are parasites that combine to produce nutrient-rich soil at the expense of the plants they feed on. In some cases, fungi and plants form a symbiotic relationship, similar to that of the oxpecker and water buffalo, which benefits both parties.

One such example is mycorrhizal fungi, which can be found at your typical garden supply store. Mycorrhizal fungi colonize the roots of plants, where they absorb mycelium, moisture and carbohydrates from the plant. In turn, they supply the plant with nutrients from the surrounding soil, making it easier for the plant to absorb essential minerals and also helping to protect it from harmful pathogens. The symbiotic relationship between mycorrhizal fungi and plants is one of the most prevalent on Earth, as it exists in more than 90 percent of all vascular land plants [source: New York Botanical Garden].

The phenomenon isn't limited to fungi, though. Rhizobium, a common type of soil bacteria, forms a similar relationship with soybean plants. By itself, the soybean plant can't fix nitrogen, so it depends on the rhizobium bacteria, which is found in the roots of the plant, to fix atmospheric nitrogen and make it available to the plant. In return, the bacteria, like mycorrhizal fungi, receive carbohydrates, which the plant produces via photosynthesis.

Author's Note: 5 Reasons Parasites Are Beneficial to the Earth

Like maggots and mold, parasites are one of the things that naturally inspires a gag reflex, and rightly so. But I was actually quite pleased when I got this assignment, because I had read about some of the research on hookworms and allergies previously, and have always been curious about it. As a lifelong allergy sufferer, I've always wondered why my body conspires to torture me when the seasons change, but no matter how bad it gets, I don't think I'd ever get up the courage to do what Jasper Lawrence did.