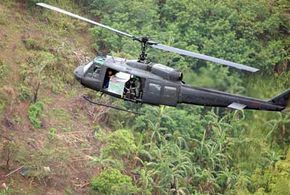 As a rule, environmentalists are a pretty peaceful bunch. Hearing them discuss the use of Global Positioning Systems and missile-tracking technology to scope out a target is somewhat disconcerting. Tree huggers using missile-tr­acking technology and dropping bombs from C-130 aircraft? What's the world coming to?

These apparently devious tactics aren't what they seem though: The forest isn't being converted into a war zone. These innovative optimists are simply adapting advanced military technologies to use in aerial reforestation. Sometimes referred to as aerial seeding, and similar to the garden planting method of broadcasting, aerial reforestation is the use of aircraft to distribute seeds to replant forests.

Aerial reforestation is actually nothing new. People have been doing it since at least the 1930s, when planes were used to distribute seeds over inaccessible mountains in Honolulu after a forest fire. It was also popular for a while in the American West after World War II. Those efforts weren't always especially successful though, and definitely not as advanced as the ideas being floated around today.

The new techniques being used in aerial reforestation were inspired in part by global warming. Proponents of aerial reforestation think it could be a potential solution to the problem by helping to bring down growing levels of carbon dioxide. Almost 50,000 acres of trees are lost worldwide each day. When they're cut or burned down, not only do they cease absorbing carbon dioxide, but they release all of what they've stored up during their lifetimes [source: FAO]. Aggressive reforestation efforts could potentially prevent the release of more than 300 billion tons of carbon dioxide over the next 40 years [source: Conservation International].

Some people now think they can use bombs and military aircraft to make that happen. But while using C-130s to drop seed bombs has yet to catch on, plain-clothes aerial reforestation is useful in its own right. Find out how it works on the next page. 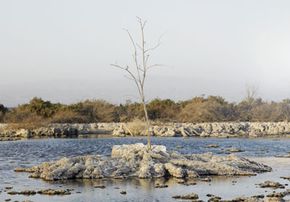 Aerial reforestation could help to replant this wetland, where people would have a difficult time maneuvering.
Siri Stafford/Getty Images

While it's not always militaristic, aerial reforestation has many applications. It's often used by the U.S. Fish and Wildlife Service to increase cover and prevent erosion at a burn site soon after a fire. It's also helpful anywhere that traditional reforestation would be difficult: barren deserts, inaccessible mountain sides, war-ravaged areas and wetlands where people might not be able to find firm footing to plant seedlings.

While it doesn't always have as high of a success rate as manual methods, its effectiveness depends on several factors such as using the right type of seeds, distributing those seeds during the appropriate season and releasing them at the right moment and in the right location. Another issue is predation: the efforts after World War II were stopped because the dropped seeds ended up feeding mice and gophers rather than growing into trees. If it's done right, though, reforestation by air can have a success rate as high as 70 percent [source: Joffe-Block].

Traditional reforestation methods, although more easily controlled than aerial methods, are labor-­intensive, time-consuming and expensive. Planting just 1 acre by hand could cost as much as $3,500 [source: Utomo].

Money matters aside, the quantities of seeds that can be planted using aerial reforestation is astonishing. A large plane could drop as many as 100,000 seeds in one flight, which comes out to about a million trees in just one day [source: MIT]. Even if only 70 percent of those survived, that would still be 700,000 trees -- a pretty successful day. Planting that many trees by hand in one day would require a lot of hands, even at the 95 percent success rate typical of manual planting methods [source: Joffe-Block].

­Of course, all this hypothesizing depends a lot on the methods used. Just like strategy can win or lose a military battle, it could be the key to winning this particular battle as well. In the next section, learn how military technology could be used in a more peaceful way.

Strategic Seed Bombs and Other Considerations 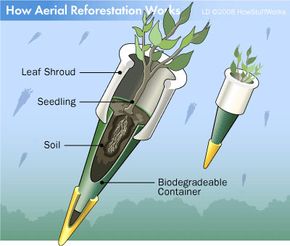 Seed canisters prevent seedlings from being damaged when dropped from a plane, yet decompose soon after to let the trees' roots emerge.
HowStuffWorks

Although you may think aerial reforestation sounds like little more than taking a bag full of seeds up in a plane and dumping them out of the cockpit, it's actually more involved. If seeds were simply tossed out from high elevations without any forethought, you'd be lucky if they even made it to fertile ground.

One thing that plays a large role in aerial reforestation's relative success is the design of the seed packages. In the early stages of aerial reforestation, it was difficult to drop seedlings from high altitudes without damaging their fragile root tips. But now, several different designs exist that encase seedlings in sturdy but biodegradable cone-shaped containers. The containers are strong enough to protect the seedlings when they hit the ground yet still disintegrate to let the trees' roots emerge. They're also packed with everything the seed needs for survival: Depending on the particular design, they may have soil, nutrients, fertilizer and even a material that pulls in surrounding moisture needed for the growing tree.

Even well-built seed canisters won't ensure success without accurate placement, tho­ugh. That's where equipment like the C-130 transport aircraft comes in -- the same equipment used by the military to lay landmines. In the late 1990s, it occurred to some people that although the military wasn't in the business of planting trees, they were pretty skilled at dropping bombs in precise locations and tracking missiles. If that technology were applied to aerial reforestation, they proposed, things might really take off.

One of the proposals was to use high-resolution cameras, attached to a remotely piloted airship, to provide up-to-the-minute data about weather conditions and soil moisture so foresters could predict the best times to schedule a drop. The airship could cruise the skies for up to two years, mapping out locations more hospitable to growth and continually relaying all the information to the ground.

Another idea, designed to achieve more precise placement of the canisters, envisioned outfitting each one with timing and ejection devices similar to the ones currently used in bombs that are dropped in a controlled pattern to destroy runways. In addition, global positioning satellites and missile-tracking equipment could pinpoint exactly where a plane was in relation to the target area. When coupled with wind speed data, that information could determine the precise moment to drop the canisters.

Since all the technologies already exist (there are more than 2,500 C-130 aircraft in 70 countries), it's simply a matter of obtaining funding to get some of these proposals literally off the ground and into the air [source: Brown]. Less technical methods, however, are already up and running.

For instance, while they don't use military aircraft, park officials at Izta-Popo National Park near Mexico City have conducted several airdrops of seed spheroids, (the name for their particular design of seed canister) to reforest the area. The Mexican National Forest Commission has also been testing aerial reforestation with its own version of seed packages to see if they might use it in future projects. In early 2008, about 400 volunteers in Louisiana built their own seed containers by wrapping seeds, sand and soil in gauze dipped in candle wax. The containers were then strategically dropped out of a helicopter along the state's southern coast.

­So while C-130s outfitted with missile-trackers aren't currently plying the skies, some of those more mundane planes you see overhead might just be loaded down with seed bombs. To learn more about aerial reforestation and other land reclamation efforts, try out the links on the next page.