Tactics and Organization of Eco-terrorists 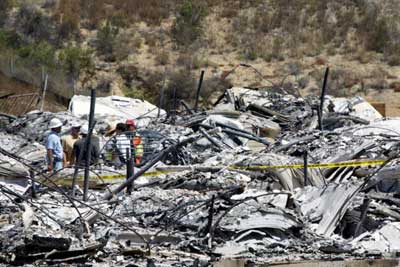 This is all that's left of a condo unit that eco-terrorists burned in 2003. A banner left at the site of the fire read, "If you build it, we will burn it," and was signed, "The E.L.F.s are mad."
David McNew/Getty Images

Although eco-terrorists engage in a range of destructive actions, their belief that all life is sacred has thus far kept them from seriously injuring anyone. So while they may have caused some serious financial damage when they torched the Seattle homes, no one was hurt in the fires because the houses were unoccupied.

The preferred method of destruction seems to be arson, probably because it is relatively simple, causes significant destruction and gets a lot of attention. For example, the 1998 firebombing of Vail ski resort to protest further development received a great deal of publicity and caused $12 million in damage [source: Archibold].

Arson is not the only trick up eco-terrorists' sleeves. They also employ other tactics designed to disrupt normal operations at target businesses and to discourage people from engaging in environmental destruction. Eco-terror activists spike roads, disable vehicles, vandalize homes and deliver sewage or dead animals to corporate offices. Since 1976, they have committed more than 1,100 terrorist acts, causing more than $110 million in damage [source: Philipkoski].

Despite all the instances of eco-terrorism, few people have been connected with any crimes. The last big arrest came in 2006 when the FBI shut down a group of people responsible for starting about 20 fires in five states that caused $40 million-plus in damage. This arrest only came about after an intense nine-year investigation called "Operation Backfire" [source: Fox News].

People familiar with the eco-terror movement claim that the structure of the groups is what makes them so hard to penetrate. There is no central leadership to guide actions and no real cohesion among members. In fact, there aren't really even any "members" -- you don't pay a $15 membership fee, get a cute tote bag and receive monthly updates in the mail. All you have to do to be part of the movement is to commit an act in the name of Mother Earth. ELF's Web site claims that members are anonymous even to each other. So even when people are found and arrested, attacks don't decline because the groups are dependent only on each individual's fervent commitment to protecting nature, not on the leadership of any one person.

Although people outside of the movement aren't certain of how eco-terror groups organize and carry out attacks, experts think the groups comprise a series of cells located across the country that recruit participants for specific activities and then disband. This method contributes to making perpetrators hard to catch. They don't stay in one place long enough to be investigated, their targets are scattered and the evidence left behind at the crime scene is limited.

Despite the "eco" prefix, eco-terrorists often take on animal rights causes, as well as environmental ones. ELF sometimes partners with its sister group, ALF, or the Animal Liberation Front, and attacks animal testing sites, fur farms and the like. Learn more about animal rights extremists next.