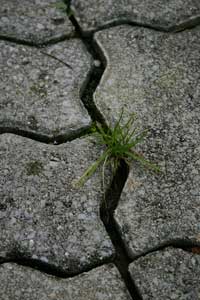 Pavers permit water to run through to the ground.
Maria Jauregui Ponte/Getty Images

The pavement and asphalt industry has been around since the 1800s. In fact, Edmund J. DeSmedt, a Belgian chemist, laid the first true asphalt pavement in the United States in 1870 -- in Newark, N.J. With advances such as the automobile and air travel, pavement became, and continues to be, one of the largest U.S. industries [source: NAPA].

However, traditional asphalt and concrete pavements have a few disadvantages. As we've already mentioned, because these materials are nonporous (or impervious), rainwater cannot seep into them and instead runs off. As the water travels, it may also collect oil, gasoline and other pollutants as it washes into neighboring streams and rivers. This runoff can cause steady landscape erosion.

Additionally, traditional asphalt gets very hot, creating a "heat island" effect in urban environments. A heat island is exactly what it sounds like -- an area that is much warmer than its surroundings. (You can learn more about this phenomenon in What is the urban heat island effect?) Many manufacturers believe green pavement can change all that. We've already talked about green pavement's superior storm runoff management, but what else does it do for the environment?

Now that we've addressed the green pavement pros, let's take a look at the cons.

How do LEED and green pavement link?

The Leadership in Energy and Environmental Design (LEED) Green Building Rating System is the national benchmark for the design and construction of high-performing, environmentally-friendly buildings. An independent party verifies that the building meets the LEED standards, which include: