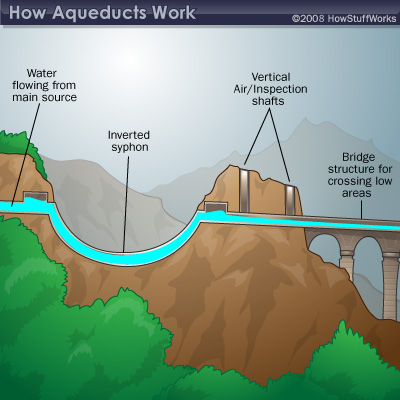 To achieve a consistent, shallow slope to move the water in a continuous flow, the Romans lay underground pipes and constructed siphons throughout the landscape. Workers dug winding channels underground and created networks of water pipes to carry water from the source lake or basin into Rome. The pipes were typically built in concrete, but were sometimes made of lead when the government provided enough cash (lead was very expensive in 300 B.C.). When the pipes had to span a valley, they built a siphon underground: a vast dip in the land that caused the water to drop so quickly it had enough momentum to make it uphill. Siphons are part of the mechanism that makes toilets flush, too (see How Toilets Work).

The problem with siphons, though, was the cost: Siphons really needed lead pipes to work effectively, since the water had to pick up speed. This led to the use of the features most of us have come to associate with Roman aqueducts: the arches. When siphons were impractical, which was often, arches were constructed to span the valley. The pipes ran along the tops of the arches.

At certain points along the route, sedimentation tanks removed impurities from the water. In other sections, access points were carved into the system so maintenance workers could access the pipes. One way the engineers facilitated maintenance was by running two pipes alongside each other and diverting water between the two so men could get inside one pipe at a time.

When ancient Rome crumbled, the aqueducts went with it. By the time the Goths invaded in 537 A.D., the water system had been seriously cut back, no longer required by a population that was shrinking every year. The Goths finished the system off, destroying all the remaining aqueducts. But during the period of the European Renaissance, Rome started to rebuild the aqueducts to supply water to all the new fountains in the city. By the 1950s, Rome had reconstructed eight aqueducts, which stand to this day [source: Antiquities].

At its height, Rome's system of aqueducts supplied each member of the populace with more than 265 gallons (1,000 liters) of water per day. That's more than many modern water systems can deliver [source: InfoRoma].

­The aqueducts in Los Angeles are nearly as impressive as those of ancient Rome (credit must be given for constructing 60 miles of aqueduct without modern drilling equipment). In Los Angeles, like in Rome, the event that precipitated the construction of the first aqueduct was rapid growth. In the early 1900s, the population exploded so quickly, that the local water supply could no longer meet demand. On the next page, we'll see how the L.A. aqueducts replicated the water-delivery system of ancient Rome.