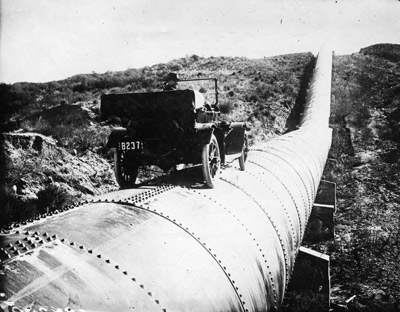 Bert Dingley drives his car along a section of the L.A. aqueduct in 1914. The massive pipes diverted water into the city.
Topical Press Agency/Getty Images

In 1904, the inadequacy of the Los Angeles River as a water supply for the growing city's 175,000 people came to a head. For 10 straight days that summer, water consumption in Los Angeles exceeded river capacity by more than 4 million gallons (about 15,141,647 liters). Finding an alternative water source became a top priority, and with an abundance of water just outside the city, aqueducts proved to be the answer.

Specifically, the water engineers in L.A. settled on the Owens River Valley, due to several main factors. First, Owens Lake received a tremendous amount of snow runoff from the Sierra Nevada Mountains, to the point of overflowing. Second, lava from a volcanic eruption had blocked the lake's tributary, meaning it could no longer release its water into the river system. All of that water, to the people tasked with finding more water for L.A., was going to waste. And third, before that volcanic eruption, the Owens water had flowed almost directly into L.A.

So L.A. went about building a 226-mile (364-km) aqueduct to carry water from Owens Valley into the city [source: LADWP]. The methods developed in ancient Rome stood the test of time, and the L.A. engineers constructed underground pipes and siphons to deliver water by way of gravity. Some of the pipes are big enough to accommodate a car. The biggest siphon in the system, which spans Jawbone Canyon with more than 8,000 feet (2,400 meters) of steel pipe weighing more than 3,200 tons, drops water 850 feet (260 meters) to the canyon floor to create the pressure required for it to travel back up the canyon [source: LADWP].

The east branch of the California Aqueduct cascades down mountainsides and uses gravity to pipe water into the city.
David McNew/Getty Images

But Los Angeles' growth continued, due in part to the tremendous amount of water available to support the city, and by the early '20s, demand once again exceeded supply. In 1923, just 10 years after the Owens Valley aqueduct was completed, Owens Valley was running dry.

Los Angeles' insatiable need for water took its toll on Owens Valley. Once the lake started to dry up, depleting the fish supply for the region, L.A. went after the groundwater. Despite widespread protest in the valley, culminating in violence in 1924, when residents used dynamite to destroy key points along the aqueduct, the city of L.A. continued to buy up land in the valley to ensure its access to the water. Agriculture in the area suffered and Owens Valley faced a long period of decline.

In 1970, around the same time that L.A. completed its second aqueduct, this one carrying water from Haiwee Reservoir just south of Owens, conservationists were starting to gain ground in the United States. A series of lawsuits resulted in several agreements between Owens Valley and Los Angeles that have helped Owens Valley to rebuild over time. Money supplied by L.A. has built fisheries, reservoirs, conservation grounds, wildlife preserves and groundwater ­management systems in the valley, which have brought it back to life, for the most part. And the aqueducts are now a source of green power, too, supporting several hydroelectric dams.

Despite the controversy that came to surround the Los Angeles aqueducts, they are nonetheless a feat of engineering as amazing as those in ancient Rome. Relying entirely on gravity, the two L.A. aqueducts today carry about 430 million gallons (1,627.7 megaliters) of water over hundreds of miles into Los Angeles every day. That should keep the city hydrated for a little while.

­For more information on aqueducts and related topics, go to the links below.