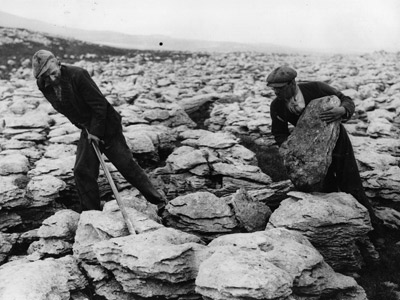 Mining limestone and extracting lime can be a carbon-intensive process.
Fox Photos/­Getty Images

­Before we can understand why adding lime to seawater could benefit the atmosphere, we first should learn what lime is. During a process called calcination, calcium carbonate (limestone) is burned and decomposes into calcium oxide (pure lime). When the calcium oxide, a white powder, is mixed with water, it becomes calcium hydroxide (Ca(OH)2)­. Calcium hydroxide is the lime that scientists talk about when they talk about adding lime to our oceans.

For centuries, lime products have been used as industrial alkalis, an ingredient in cements and mortars. Because lime is a strong alkali capable of neutralizing acids, it's also used to treat soil, drinking water, wastewater and industrial acid streams. For years, scientists have considered it a possible solution for increasing the alkalinity of seawater, and conversely, lowering the growing acidity level.

Although the idea has been talked about for years, potential negatives have held back implementation. The process of mining limestone and extracting lime from it generates CO2 -- if the point is to cut CO2 from the atmosphere, the solution itself shouldn't contribute to the problem. Some proponents of the idea suggest extracting lime in regions with native limestone resources and a local energy source -- areas where the calcination process could happen naturally and on location. Also, with further investigation, researchers have discovered the ocean is able to mitigate the impact of producing lime. Because seawater is able to take in almost twice as much CO2­ as is generated by the lime creation process, the process is considered carbon neutral.