Could Salter's Duck have solved the oil crisis? 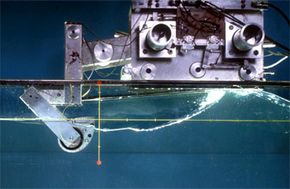 A lab test of Salter's Duck. The Duck is the tear-drop shaped object, many of which would be attached to a long spine undersea. In practice, the duck will not need the mounting above it. See more green science pictures.
Jamie Taylor/Stephen Salter

You know the price of gas is high when you settle for the closest station because it's not worth wasting precious gas to drive around looking for a better price. Or when people start trading in their gas-guzzling lawn mowers for an old-fashioned push mower [source: AP].

Rising prices and the fear of reaching peak oil cause people to question whether we're entering -- or are in the midst of -- an oil crisis. Environmental activists, who want to reduce the output of greenhouse gases from fossil-fueled power plants, see an upside to this situation, however. As more people call on companies and governments to solve or prevent an impending crisis, environmentalists get a chance to promote and fund clean, renewable energy.

A similar scenario played out in the 1970s, when an oil crisis stirred business and government leaders to invest in energy alternatives. The Organization of the Petroleum Exporting Countries (OPEC) as well as Egypt and Syria agreed to stop shipping their oil to countries that supported Israel in the Yom Kippur War, which included the U.S., among other countries [source: Halber].

Stephen Salter, a professor at the University of Edinburgh in the U.K. who was working with robotics, saw a solution in the sea. He began working with a group to develop a device that would efficiently convert the power of ocean waves into usable electricity. Waves occur when water absorbs the energy of winds and condenses that energy into an extremely powerful, reliable force. The difficulty comes with trying to harness this immense energy.

The group came up with a mechanism known as Salter's Duck (or the Edinburgh Duck), which they thought could reduce the country's dependence on oil. Certainly, the idea behind Salter's Duck achieved everyone's highest expectations about the potential of using wave energy. But did it ever came into fruition?

Keep reading to find out.

Mo­re recently, Salter started work on another kind of duck device that would desalinate, or de-salt, seawater. As it bobs, it pressurizes the atmosphere inside, which lowers the boiling point of water. Heating this water will then turn it to steam, ridding it of salt. It then condenses the steam into drinkable water and sends it to shore via the duck's connection to the seabed [source: Simonite]. 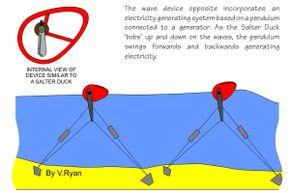 This diagram gives us an idea how the Duck's head would bob with waves. This conception includes a pendulum inside the Duck's head.
TechnologyStudent.com/V. Ryan

Salter's Duck is just one of many concepts for a wave energy converter (WEC), which can potentially convert wave power to usable energy. But in the 1970s, when alternative energy was gaining a lot of hype, it was the most exciting possibility. Since then, some companies have successfully implemented other WECs, like the farm of Pelamis devices (consisting of a series of floating cylindrical devices that drive generators) off Portugal. The Pelamis was even designed by Salter's former students [source: Economist]. But compared to Salter's Duck, these modern devices are relatively inefficient. (For more information on wave energy devices, read How Wave Energy Works)

The Duck falls under a class of WECs known as terminators. Terminators are oriented perpendicular to the direction of the wave. And, this is appropriate, as the Duck is basically the Schwarzenegger of WECs, destroying the waves it faces, leaving a calmer sea on the other side [source: Stuart].

The Duck itself is shaped like a teardrop, and many of these "teardrops" attach to a long spine to make up the whole Salter's system [source: Cavendish]. The nose of the teardrop faces incoming waves and bobs as they pass. Essentially, this involves a transfer, or "capture," of the wave's energy. In theory, this bobbing action would capture as much as 90 percent of the wave's massive energy, and uses that energy to keep pistons running. The pistons in turn pressurize hydraulic oil. When pressurized enough, the oil enters a hydraulic motor, which generates electricity [source: Stuart]. The system would theoretically use 90 percent of the captured energy. This high efficiency makes the Duck the Holy Grail of WECs.

Salter and his team tested the Duck in special tanks, using a wave maker. Before they were able to test the Duck at sea, they estimated that they were close to a Duck that would produce electricity at a cost cheap enough to compete with other energy sources.

After the embargo ended, the interest in renewable energy didn't fade completely. Salter and his group had to compete for grants against other renewable energies, such as nuclear power. In the end, nuclear power seemed more economically feasible to the panel that awarded grants. Salter's group lost funding in the early 1980s, before it got a chance to test the mechanism in the ocean, which would have cost a pretty penny. He and others still contend that members of the panel were biased toward nuclear energy [source: Stuart]. Some say the nuclear proponents exaggerated the costs of the electricity the Duck would produce [source: GreenLeft].

Had Salter's group continued to secure funding, perhaps the Duck would be implemented today, powering a portion of the world's energy. It's hard to say whether the Duck alone could have solved the oil crisis, however. When it comes to renewable energy, getting the price low enough to compete with fossil fuels and nuclear power is really what determines its success. And, because it never got to sea for much-needed testing, we can't say with certainty how cheap its electricity would have been.

Also, even if the Duck succeeded, some argue that only areas of the world hit with powerful waves could use it. So, although it might solve an oil crisis in Scotland, which is pummeled with large waves on its coasts, it might not solve it in the U.S., where only a limited amount of coastline receives powerful waves.

On the next page, you'll find links to more articles on alternative energy and the ocean.