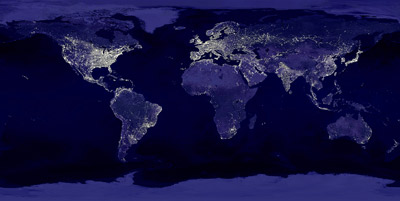 A composite image of the Earth at night makes the world's biggest power consumers stand out.
Max Dannenbaum/Stone/Getty Images

­­Consumer culture is spreading from affluent countries in North America, Europe and Asia to developing nations around the world, bringing with it the voracious appetite for goods, services and energy.

Energy consumption is reportedly higher in countries where less than 5 percent of the population lives below the poverty line than it is in countries where most people live in poverty -- four times higher. For example, Americans make up­ less than 5 percent of the world’s population yet consume 26 percent of the world’s energy [source: Worldwatch Institute]. Together, the United States and Canada account for 50 percent of energy consumed by the world’s richest industrialized countries; Europe, 33 percent. But the power landscape is changing. In the first half of 2003, auto sales in China grew 80 percent, and 4 million new privately owned cars hit the roads -- cars that will consume fossil-fuel energy [source: Worldwatch Institute].

When we talk about energy consumption, we’re talking about the sources of energy that generate our power: oil, coal, natural gas and alternatives like solar, wind, hydropower and biofuels. (Brazil, for example, generates electricity by burning sugarcane waste.) Currently, the world’s population consumes 15 terawatts of power from a combination of these energy sources [source: The Economist]. Just how much power is 15 terawatts? Let's think of it in smaller and more familiar terms: watts. Many of the lightbulbs in our homes consume 100 watts of energy. One terawatt could power about 10 billion 100-watt lightbulbs at the same time [source: Steacie Institute for Molecular Sciences].Collectively, developing countries use 30 percent of the world's energy, but with projected population and economic growth in those markets, energy demands are expected to rise 95 percent. Overall global consumption is expected to rise 50 percent from 2005 to 2030, primarily in the fossil-fuel sector [source: United States Energy Information Agency].

Let’s look at the primary types of energy sources the world consumes while adding up those 15 terawatts. We'll also explore some of the alternative, renewable opportunities that are gaining popularity.­ 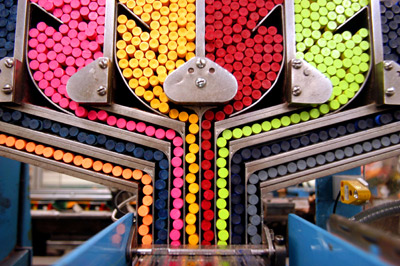