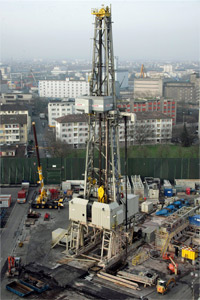 A drilling derrick that's part of the Deep Heat Mining energy project rises up in Switzerland in 2007. Geothermal power could provide 250,000 times more energy than the world currently consumes yearly, according to AP.
AP Photo/Georgios Kefalas

To understand how engineered geothermal systems (EGSs) work, it helps to start with how the systems are built. They're built into hot, deep rocks: basement, sedimentary or volcanic rocks. Developers drill wells 1.9 to 6.2 miles (3 to 10 kilometers) into the rocks, using conventional oil drills. The temperature down there measures some 160 degrees F to 600 degrees F (71 degrees C to 315 degrees C). The depth is deeper than that used in natural geothermal systems, but the temperature is about the same.

The rocks need to have a special history. These rocks, like all rocks, were stressed long ago -- thereby becoming cracked. Over time, the cracks resealed with crusts of minerals, but that's all part of the plan. The next step is to force water into the rock using high-pressure pumps.

Here's where another piece of the rock's history comes in. The rock is still under stress, so it's just aching to break along its old cracks. Forcing water into it does the trick, and it slips along its cracks. The rock's rough edges prop it open.

Now, we're ready to talk about electricity. The power plant on the surface has pairs of wells -- injection wells and production wells. Cold water gets pumped down the injection wells. As it percolates through cracks in the hot rock, it heats. Once it's hot enough, it rises by its own heat or by the pressure from incoming water up the production well. The rest is geothermal as usual: Hot water makes steam and drives turbines. Cooling towers or pipes cool the water and recycle it back into the injection wells.

Almost any site can be used to build an EGS because hot rock is everywhere. But the best sites occur where the hot rock is most stressed and closest to the surface. Developers can drill temperature wells and look for stress in the surface geology to assess sites. In several countries, including the United States, governmental surveyors are making systematic maps.

Next, we'll explore the risks of meddling underground.

The hot water rising from the wells of an engineered geothermal system can also heat buildings directly, in addition to generating electricity.