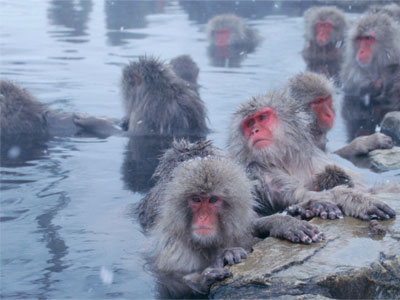 Here's another benefit of geothermal: Monkeys like it. Japanese macaques hanging out at the hot springs in Macaca Yamanouchi Town, Nagano Prefecture, Japan.
Akira Kaede/Getty Images

All geothermal power, whether natural or engineered, has economic and environmental benefits, like reliability. It can supply electricity nonstop, owing to the Earth always being hot and radiating heat predictably. The same can't be said of wind or solar power, since the wind dies down, and the sun sets.

Engineered geothermal, like natural geothermal, is renewable, meaning it doesn't deplete Earth's heat. That's not to say that sites don't wear out. They do. "You mine heat from this local region underground faster than it's being resupplied by radioactive minerals in the rock and conduction through the Earth," says Jefferson Tester, an EGS expert at MIT. Eventually, the rock between the injection and production well gets cold. But like crop rotation, new wells can be drilled nearby, where the rock is as hot as ever. By rotating among several pairs of wells, you can keep getting hot water. Overall, the process extracts a small fraction of the heat in a big block of rock and a laughably small amount of Earth's heat. No system could dream of cooling off the Earth.

Engineered and natural geothermal use the same power plants, which are very clean. Binary plants, the cleanest designs, emit no gas into the environment, not even steam clouds. The circulating water stays in a pipe and boils another fluid to turn the plant's turbines. Steam and flash plants, which puff out billowing steam clouds, naturally emit little sulfur dioxide, nitrogen oxide and carbon dioxide and have scrubbers that let virtually no hydrogen sulfide escape.

Geothermal power also offers a country energy security. Because the resource is on home soil, and for all purposes, unlimited, there's no need to worry about the cost of imports. And unlike nuclear power, byproducts of geothermal can't be used for weapons.

Next, we'll look at the projected price tag for engineered geothermal.