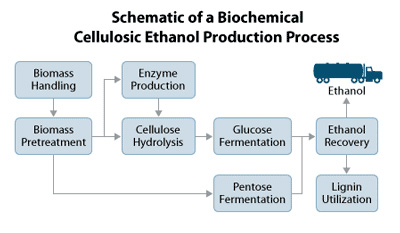 Cellulosic ethanol starts with cellulosic biomass. Almost every stem, leaf and tree trunk in the world qualifies, from farm wastes to grass clippings and recycled newspaper [source: BlueFire]. Farmers also can grow energy crops for cellulosic biomass, including switchgrass, and some trees. They're called energy crops because they grow densely in a small area and don't need much else.

The first step in production is transporting the plants to the refinery. The refinery would then make ethanol either biochemically or thermochemically.

We'll explain the biochemical method first. Let's say we're in corn country in the Midwestern United States. After harvest, farmers bundle dry corn stalks and cobs littering the field and truck them to a nearby refinery. The debris is ground into bits.

The bits go to pretreatment, where they steep in hot sulfuric acid. Cellular walls and contents dissolve. The acid pushes lignin out of the way to free hemicellulose, then decomposes hemicellulose into its four sugars: xylose, mannose, arabinose and galactose. Cellulose is now freed.

Scientists call the next step cellulose hydrolysis. Here, the acid is washed off, and the mixture goes to tanks with enzymes called cellulases, which turn cellulose into glucose.

Now, we have a soup of sugars: glucose, plus hemicellulose's four sugars. Their concentrations and the microbes used in the next tank for fermentation, depend on the plant species you started with.

Next comes separation. Stillage -- everything that's not alcohol -- settles to the bottom of a tank and is sent for processing and reuse. The alcohol stays on top and goes to distilling, which purifies it to fuel grade [source: DOE].

Making cellulosic ethanol thermochemically poses benefits. The thermochemical method converts lignin and gets the most ethanol from wood or any plant [source: NREL]. Thermochemical conversion has drawbacks, too, including expensive catalysts and tar buildup that has to be cleaned.

While refineries order the thermochemical steps differently, they start by drying the plants. Next, the plants are burned into a synthesis gas, or "syngas," made of carbon monoxide (CO) and hydrogen (H2). Because gasification also forms tar and sulfur, which interfere with making ethanol, the gases go to a tar reformer, which chemically converts these obstructions into more syngas. The gas is cleaned again to get closer to pure CO and H2, then compressed and run across a metal catalyst. The catalyst builds the gases back up into molecules of choice: ethanol or hydrocarbons that are similar to gasoline. Separations remove the ethanol [source: NREL].

For either method, the ethanol is trucked to special stations to mix with gasoline, arriving at gas stations afterward.