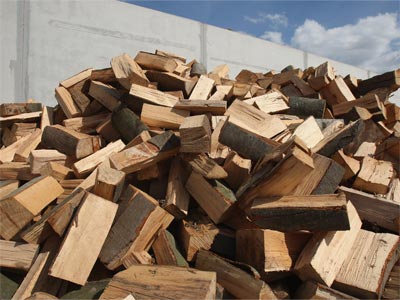 That's not corn! Nope, the latest alternative fuel that may someday power your cars relies on biomass such as cut wood as its starting point. See more green science pictures.
Sean Gallup/Getty Images

The United States used an average of 20.7 million barrels of petroleum daily in 2007, more than any other country, and more than half of which was imported [sources: EIA, EIA]. The country, however, is hoping to change that scenario, and U.S. energy policy is sending a clear message: Import less petroleum and use more renewable fuels. The latest law behind the message, the Energy Independence and Security Act of 2007, requires the country to replace 36 billion gallons of its annual petroleum use with renewable fuel by 2022 [source: RFA].

Corn ethanol and cellulosic ethanol rank among the fuels that will make up the difference. We know corn ethanol. What is the new stuff? It's alcohol made from tough plant stems, leaves and trunks instead of supple starch. So far, refineries around the world can produce it only on a demonstration scale. It's more complicated to make than corn ethanol. If it were sold at the pump now, it would be more expensive than both corn ethanol and gasoline.

The U.S. government has invested in cellulosic ethanol research and refineries, including $1.3 billion for the Department of Energy to dispense in 2009 [source: Waltz (2009)]. The funding has seeded commercial plants, which could open in the United States as early as 2010.

Driving on cellulosic ethanol as opposed to pure gasoline has environmental benefits, and it could eventually be cheaper than other liquid fuels, depending on the price of corn and oil.

Read on to learn what this fledgling fuel has to offer.