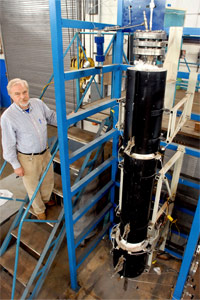 Some of the most promising, attention-getting energy alternatives aren't revolutionary ideas. We all know about windmills and waterwheels, which have been around for centuries. Today, a variety of improvements, including innovative turbine designs, are transforming these ancient machines into cutting-edge technologies that can help nations satisfy their energy needs.

There's another old process -- one you probably don't know much about -- that's gaining in popularity and may join wind and hydropower in the pantheon of clean, renewable energy. The process is known as gasification, a set of chemical reactions that uses limited oxygen to convert a carbon-containing feedstock into a synthetic gas, or syngas.

It sounds like combustion, but it's not. Combustion uses an abundance of oxygen to produce heat and light by burning. Gasification uses only a tiny amount of oxygen, which is combined with steam and cooked under intense pressure. This initiates a series of reactions that produces a gaseous mixture composed primarily of carbon monoxide and hydrogen. This syngas can be burned directly or used as a starting point to manufacture fertilizers, pure hydrogen, methane or liquid transportation fuels.

Believe it or not, gasification has been around for decades. Scottish engineer William Murdoch gets credit for developing the basic process. In the late 1790s, using coal as a feedstock, he produced syngas in sufficient quantity to light his home. Eventually, cities in Europe and America began using syngas -- or "town gas" as it was known then -- to light city streets and homes. Eventually, natural gas and electricity generated from coal-burning power plants replaced town gas as the preferred source of heat and light.

Today, with a global climate crisis looming on the horizon and power-hungry nations on the hunt for alternative energy sources, gasification is making a comeback. The Gasification Technologies Council expects world gasification capacity to grow by more than 70 percent by 2015. Much of that growth will occur in Asia, driven by rapid development in China and India. But the United States is embracing gasification, as well.

Let's take a closer look at how this process works. We're going to start with coal gasification, the most common form of the process. 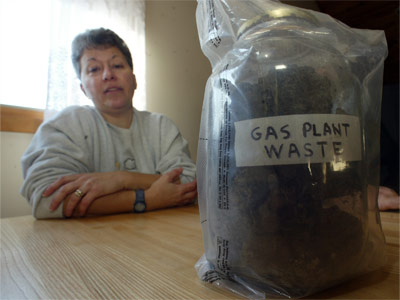 The heart of a coal-fired power plant is a boiler, in which coal is burned by combustion to turn water into steam. The following equation shows what burning coal looks like chemically: C + O2 --> CO2. Coal isn't made of pure carbon, but of carbon bound to many other elements. Still, coal's carbon content is high, and it's the carbon that combines with oxygen in combustion to produce carbon dioxide, the major culprit in global warming. Other byproducts of coal combustion include sulfur oxides, nitrogen oxides, mercury and naturally occurring radioactive materials.

The heart of a power plant that incorporates gasification isn't a boiler, but a gasifier, a cylindrical pressure vessel about 40 feet (12 meters) high by 13 feet (4 meters) across. Feedstocks enter the gasifier at the top, while steam and oxygen enter from below. Any kind of carbon-containing material can be a feedstock, but coal gasification, of course, requires coal. A typical gasification plant could use 16,000 tons (14,515 metric tons) of lignite, a brownish type of coal, daily.

A gasifier operates at higher temperatures and pressures than a coal boiler -- about 2,600 degrees Fahrenheit (1,427 degrees Celsius) and 1,000 pounds per square inch (6,895 kilopascals), respectively. This causes the coal to undergo different chemical reactions. First, partial oxidation of the coal's carbon releases heat that helps feed the gasification reactions. The first of these is pyrolysis, which occurs as coal's volatile matter degrades into several gases, leaving behind char, a charcoal-like substance. Then, reduction reactions transform the remaining carbon in the char to a gaseous mixture known as syngas.

Carbon monoxide and hydrogen are the two primary components of syngas. During a process known as gas cleanup, the raw syngas runs through a cooling chamber that can be used to separate the various components. Cleaning can remove harmful impurities, including sulfur, mercury and unconverted carbon. Even carbon dioxide can be pulled out of the gas and either stored underground or used in ammonia or methanol production.

That leaves pure hydrogen and carbon monoxide, which can be combusted cleanly in gas turbines to produce electricity. Or, some power plants convert the syngas to natural gas by passing the cleaned gas over a nickel catalyst, causing carbon monoxide and carbon dioxide to react with free hydrogen to form methane. This "substitute natural gas" behaves like regular natural gas and can be used to generate electricity or heat homes and businesses.

But if coal is unavailable, gasification is still possible. All you need is some wood.

Although the electric power industry has recently become interested in gasification, the chemical, refining and fertilizer industries have been using the process for decades. That's because the major components of syngas -- hydrogen and carbon monoxide -- are the basic building blocks of several other products. Some of the most important products derived from syngas include methanol, nitrogen-based fertilizers and hydrogen for oil refining and transportation fuels. Even slag, a glasslike byproduct of the gasification process, can be used in roofing materials or as a roadbed material.

Coal gasification is sometimes called "clean coal" because it can be used to generate electricity without belching toxins and carbon dioxide into the atmosphere. But it's still based on a nonrenewable fossil fuel. And it still requires mining operations that scar the Earth and leave behind toxic wastes of their own. Wood gasification -- or biomass gasification, to be more technically correct -- may provide a viable alternative. Biomass is considered a renewable energy source because it's made from organic materials, such as trees, crops and even garbage.

Biomass gasification works just like coal gasification: A feedstock enters a gasifier, which cooks the carbon-containing material in a low-oxygen environment to produce syngas. Feedstocks generally fall into one of four categories:

The choice of feedstock determines the gasifier design. Three designs are common in biomass gasification: updraft, downdraft and crossdraft. In an updraft gasifier, wood enters the gasification chamber from above, falls onto a grate and forms a fuel pile. Air enters from below the grate and flows up through the fuel pile. The syngas, also known as producer gas in biomass circles, exits the top of the chamber. In downdraft or crossdraft gasifiers, the air and syngas may enter and exit at different locations.

The choice of fuel and gasifier design affects the relative proportions of compounds in the syngas. For example, wheat straw placed in a downdraft gasifier produces the following:

But charcoal placed in a downdraft gasifier produces the following:

Now you're ready to make your own wood gasifier. Keep clicking to see how.

Believe it or not, one of the main uses of wood gasification has been to power internal combustion engines. Before 1940, gasification-powered cars were occasionally seen, especially in Europe. Then, during World War II, petroleum shortages forced people to think about alternatives. The transportation industries of Western Europe relied on wood gasification to power vehicles and ensure that food and other important materials made it to consumers. After the war, as gas and oil became widely available, gasification was largely forgotten. A future petroleum shortage, however, may revitalize our interest in this old technology. The car driver of the future may ask to "fill 'er up" with a few sticks of wood instead of a few gallons of gas. 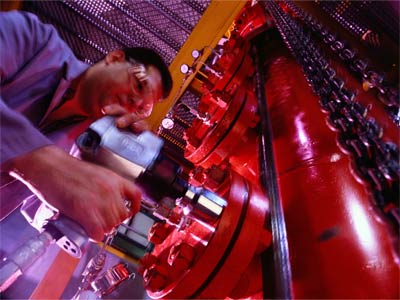 Does the future hold a lot more energy from gasifiers such as this one?
Phillip Spears/Getty Images

One attractive quality of gasification is its scalability. The Polk Power Station just southeast of Tampa is a gasification plant covering 4,300 acres (1,740 hectares). It converts 100 tons (90.7 metric tons) of coal an hour into 250 million watts of power for about 60,000 homes and businesses [source: Folger].

But you don't have to be a giant public utility to experiment with gasification. You can build a simple, small gasifier with materials you find around the house. YouTube features several videos of these homemade units. One video, for example, shows a paint can playing the role of the pressure vessel in which gasification reactions occur. As the syngas is produced inside the sealed can, it moves through some simple plumbing fittings to a burner can, where the gas can be ignited.

Another interesting video shows a small team assembling and operating a wood gasifier based on plans prepared by the U.S. Federal Emergency Management Agency (FEMA) and the Oak Ridge National Laboratory. FEMA developed these plans in 1989 specifically for small-scale gasification in the event of a petroleum emergency. The agency's report includes detailed, illustrated instructions for the fabrication, installation and operation of a downdraft biomass gasifier. (A link to the report is included in the source list under "Lafontaine" on the next page.) The unit requires a galvanized metal trash can, a small metal drum, common plumbing fittings and a stainless steel mixing bowl and can be mounted on a vehicle to provide syngas for internal combustion. With the gasifier in place, the vehicle can run reliably using wood chips or other biomass as the fuel.

If you're interested in gasification, but aren't the do-it-yourself type, then you might want to consider buying a gasification unit from a manufacturer. For example, New Horizon Corporation distributes gasification systems that can be installed in a home environment. These biomass gasification boilers can heat houses, garages and other buildings and can use a variety of fuels, including seasoned wood, corn cobs, sawdust, wood chips and any kind of pellet.

Either way, gasification will likely emerge as one of the most important energy alternatives in the coming decades. It's the cleanest way to use coal, but also works efficiently with renewable energy sources, such as biomass. And, because one of the primary products of gasification is hydrogen, the process offers a stepping stone to producing large quantities of hydrogen for fuel cells and cleaner fuels.

Keep reading for more links to the future of energy and green technology.

5 Energy-hungry Appliances
What are eco-plastics?
How Zero-energy Homes Work