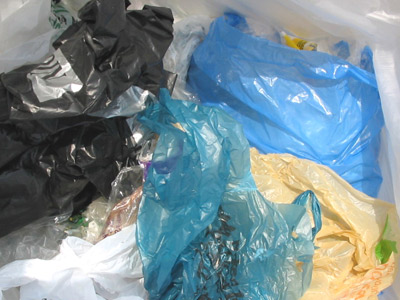 Plastic piles up in landfills around the world. See more pictures of green living.
Image courtesy of Cambridge.gov

Every year, U.S. landfills handle tens of billions of tons of plastic [source: ACF]. And in this case "handle" means "do nothing with" -- plastic just sits there unfazed for hundreds of years. The microbes that degrade other trash don't want anything to do with plastic.

The eco-nightmare that is plastic-laden landfills has sparked the move from plastic to paper grocery bags, cardboard instead of plastic for prepared foods and products like the exclusive-to-Japan Toyota Raum -- a car whose interior boasts some "eco-plastic" components. [source: SLM].

Eco-plastic seems like an oxymoron, and it very well may be. But it also seems to be the next step in greening our lives.

Eco-plastics come in all different forms. Some are simply plastics made all or partially from recycled traditional plastics. Traditional petroleum-based plastics are the kind that sit in landfills for centuries. These "eco-plastics" aren't any more biodegradable than the nonrecycled kind, but they have the environmental benefit of keeping a lot of that nonbiodegradable stuff out of landfills in the first place.

But when people talk about environmentally friendly plastic, they're more often talking about "bioplastics," a very different animal. Bioplastics are made from biological material instead of from fossil fuels, and they're supposed to have very different properties from traditional plastics. There's also a pretty new subgroup of plastics made with synthetic materials that might react differently in landfills from the regular stuff.

In this article, we'll find out what these eco-plastics really are, what they're used in and how they may (or may not) help the environment.

To begin to understand what eco-plastics are all about, it's helpful to understand the goals of the product. With the exception of the recycled traditional-plastic kind, eco-plastics should, first and foremost, degrade under normal landfill conditions. But the big question is -- is that even possible? 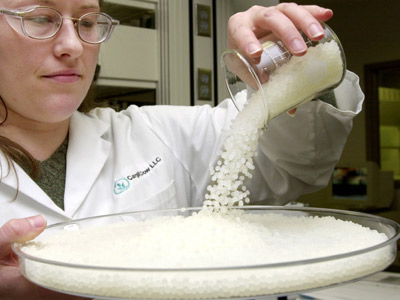 Most of us have understood for years that plastic is an environmental no-no. It's fuel based, requires lots of energy to produce and it clogs up landfills for what might as well be forever. It's difficult to imagine a plastic we can buy without guilt. And whether eco-plastics fit that bill depends on how "green" you want to be.

Recycled traditional plastic is composed of varying percentages of "virgin" (nonrecycled), traditional plastic. The eco draw here is that all that virgin plastic is reused to make your lawn furniture instead of being tossed into a landfill. This type is no more biodegradable than the original, though.

Bioplastic is made from plant material and it should degrade relatively quickly in landfills and, in some cases, compost bins. The most common forms are starch-based (often corn starch), like polyactide (PLA) plastic, which is the most common form. You'll find PLA in things like biodegradable food-service trays and disposable cups. Polyhydroxyalkanoate (PHA) plastic uses starch also, typically from corn or sugarcane or beetroot, and it shows up in things like cosmetics bottles. Cellulose-based plastics are made of cellulose, the main component in plant tissues. You'll also find bioplastics made from soy protein or lactic acid.

Finally, there are several recent plastics innovations that make up the "miscellaneous" category. ECM Biofilms has come up with a way to add microbe-attracting pellets during the manufacturing process for traditional plastics, causing the end product to degrade faster in landfills [source: ACF]. The company Novomer plans to create biodegradable plastic using carbon dioxide and carbon monoxide (reacted with liquid metal), which would offer the double "green" whammy of biodegradability and removing harmful gasses from the air [source: CNET].

While all of these eco-plastics offer some type of environmental benefit over traditional plastics, the issue ultimately comes down to theory versus practice. In theory, these plastics are biodegradable. But since they're pretty new, at least in industrial terms, the long-term research is a bit lacking. 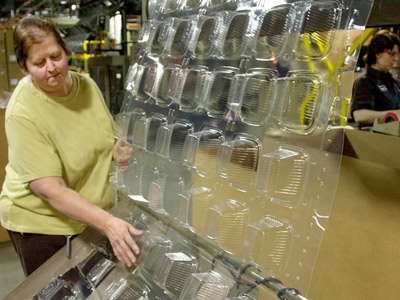 A quality control employee checks containers made from corn plastic as they come out of the forming machine.
AP Photo/Nati Harnik

To date, the greatest volume of research on the biodegradability of eco-plastics is regarding bioplastics, and specifically PLA, the most common, starch-based kind. Here's what we know:

PLA is, in fact, biodegradable, but it's not easily biodegradable [source: Teschler]. We don't know what the actual time frame is for landfill conditions. The stuff should break down after it's dumped, but there's no definitive evidence on whether that'll happen quickly or just eventually. As for degrading in compost bins, some research says it'll take anywhere from three months to one year; others have found that it won't happen at all in home compost settings -- that only commercial setups will be able to break the stuff down [sources: Worldcentric, Teschler].

We do know that until it breaks down, it'll be taking up as much space as the petroleum-based plastic. Bioplastic containers typically contain at least as much material as traditional plastic containers.

Besides solid-waste volume and the tendency to biodegrade, another big issue surrounding eco-plastics is energy consumption. Does manufacturing the "green" plastic containers use less energy than manufacturing petroleum-based containers? The jury is still out on that one. Some say it uses about the same amount, because shaping starch-based material into cup form doesn't take any less effort than shaping fossil-fuel-based material into cup form [source: Teschler]. One point to remember here, though, is that companies in the eco-plastic business are more likely to adopt alternative- or low-energy processes, since they're aiming for the "green" market. The bioplastics company Ingeo, for instance, has instituted new manufacturing processes that reduce its greenhouse gas emissions by 60 percent and its overall energy needs by 30 percent [source: GD]. According to the company, creating Ingeo bioplastic now emits 77 percent less CO2 than creating typical petroleum-based plastic.

One definitive environmental downside to bioplastics is land use. Growing all that corn or sugarcane or beetroot takes a lot of farm land that could otherwise be used to grow crops for food or ethanol. On the other hand, if we've got to have our plastics, it could be worth the sacrifice: When the food company ConAgra switched from petroleum-based plastic to PLA plastic for the shrink wraps on some of its products, including Parkay and Fleishmann's margarine, it estimates it cut in CO2 footprint by half a million pounds [source: GD]. Imagine if they started making the tubs from bioplastics, too.

For more information on eco-plastics and related topics, look over the links on the next page.