Browse the article Is there a way to get solar energy at night? 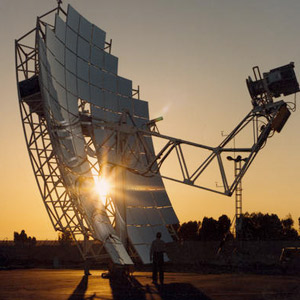 Solar-thermal collectors are able to keep the plant running after the sun has gone down. See more green science pictures.
Image courtesy of EIA/NREL

If you've ever bought carbon offsets, you may have noticed that the most or all of the purchase price goes toward wind energy, not solar. In the world of large-scale alternative energy, wind reigns supreme, mostly because it's cheaper. But a recent development in solar-energy production could make solar power a far more viable option.

In most cases, the sun's energy is converted into electricity in one of two ways: using photovoltaic cells, which turn the sun's light into electricity using a semiconductor material that absorbs photons and releases electrons; or using solar-thermal turbines, which use the sun's heat to generate steam, which then spins a turbine to produce electricity. It's the solar-thermal power plant that is poised for a big change.

The big problem with solar power is the most obvious one: The sun doesn't shine all the time. At nighttime or on cloudy days, power plants simply can't access the sun's energy. This makes solar power expensive, since the power plants can't run 24/7. A cloud floats overhead and the plant is suddenly at an energy standstill, producing nothing. It also makes solar-generated power unavailable at times -- like at night, when power demand is greatest.

The solution is a simple one: Store the sun's energy so you can use it when the sun's not available. Unfortunately, implementing that solution has been extremely problematic -- until a recent breakthrough made solar-energy storage a realistic option for the energy industry.

In this article, we'll find out how it's possible to efficiently store the power in sunshine so we can access it when the sun sets. We'll also look at the first commercial power plant built to use the technology to find out how the system works.

The storage material that makes the breakthrough possible is probably sitting in your kitchen right now. 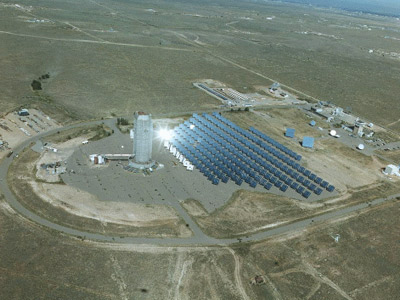 An array of collectors is able to collect energy from the sun that is stored for later use.
Image courtesy of Sandia National Laboratories

The idea of storing the sun's energy is nothing new. People have been trying to devise a way to pause the process -- hold onto the energy in sunlight for a while before converting it to electricity -- for as long as solar power has been an electricity option. All previous attempts, though, have been prohibitively problematic.

Some have tried to store the sun's energy by using it to pump water uphill, where the energy stays until the water moves back downhill, releasing it. Compressing and then un-compressing air is another option. But both of those methods waste energy -- only about 80 percent of the solar power put in is recovered on the other end [source: Bielo]. Batteries are also extremely inefficient, making them too expensive to be a viable large-scale storage option. You can store as much energy in a coffee thermos as in a laptop battery, which costs 10 times as much [source: Wald].

And there's where the breakthrough comes in: Heat is easy to store.

That's essentially what the thermos is doing, storing the heat of that coffee. And heat generates electricity in a solar-thermal power plant, so storing heat is a way to pause the process: Let the sun heat something up, keep that thing hot until the sun goes down, and then use that heat to generate the steam that turns the turbine.

Of course, as relatively easy as it is to store heat, you've got to find the right substance for a solar-power application. To store the extreme heat that runs a solar-thermal power plant, the substance has to remain stable at high temperatures -- in the area of 750 degrees F (400 degrees C) -- otherwise you'd run into problems with vaporizing and pressure changes [source: Bielo]. It's also helpful is the substance is cheap and readily available.

Enter that white, crystalline stuff in your cupboard that you probably put on your scrambled eggs, your margarita glass and your edamame: salt. Salt melts at only very high temperatures, vaporizes at very, very high temperatures and it's available in virtually unlimited, low-cost supply. Plus, it only loses about 7 percent of the energy put into it [source: Bielo]. 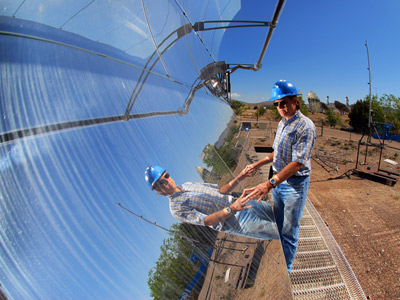 For more information on solar energy storage and related topics, look over the links on the next page.