How Gravity-powered Floor Lamps Will Work 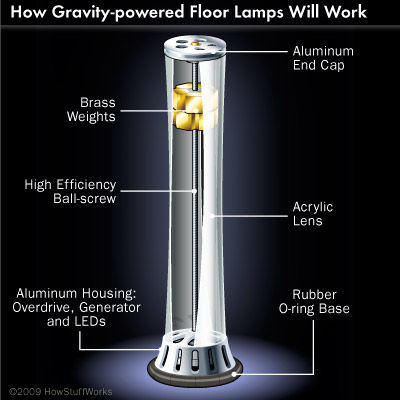 The idea of using the force of gravity to generate power has been around for some time. As far back as the 1970s, for instance, scientists were discussing the theoretical possibility of tapping into the gravitational pull of black holes to generate power [source: Time]. The idea was that if matter could be fired at a black hole from a safe distance (so the firing device wouldn't be sucked in), the extreme squeezing of that matter by the hole's gravity would make it hot enough to start a fusion reaction.

The Gravia lamp relies on a much simpler concept: Gravity pulls objects downward.

The lamp is a standing floor lamp, 58 inches (147 centimeters) tall and cylinder-shaped. Inside the cylinder, there are several basic parts involved in creating light: brass weights, a ball screw, a drive gear, a rotor, generator and a bunch of LEDs. Here's how the process works:

All of this happens over the course of four hours, and the LEDs, which light up a few seconds after the weights start to drop, remain on for that full period. They emit between 600 and 800 lumens, which is comparable to a typical 40-watt bulb [source: Dunn]. When the weights make it to the bottom of the lamp, the LEDs go out, and the person who started the chain of events has to input more power by moving the weights back up to the top of the screw.

Using gravity to light up LEDs is pretty amazing as it is. But the lamp has some benefits beyond being a conversation piece.