by Cameron Lawrence
Next 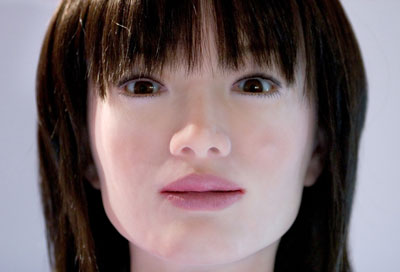 Early last month, a senior researcher at the Korea Institute of Industrial Technology introduced the world to EveR-1, a female android modeled after a 20-something Korean woman. Fifteen small motors, covered in a skin-like silicon compound, power EveR-1's facial expressions. Baeg Moon-hong, EveR-1's creator, programmed the motors so the android can convey emotions and make eye contact. She can't walk, but she'll entertain your kids regardless.

EveR-1's debut comes nearly one year after Japan's Hiroshi Ishiguru introduced his own female droid, Repilee Q1. Her internal sensors give Repilee lifelike reflexes -- blocking slaps or incoming projectiles. She can also speak and appears to breathe. Sounds a little creepy to you? Me too. But that's no reason to be ashamed: even Repilee's creator thinks that she's a little too realistic.

People have been getting creeped out by the idea of intelligently and emotionally autonomous robots for decades. According to MSNBC's brief history on robotics, it all started with the Czechoslovakian playwright, Karel Capek, and his play "R.U.R." (Rossums Universal Robots). Capek created the term "robot," basing it on the Czech word for forced labor. In his play, the robots turn on their masters after they're given emotions and shove off the yoke of oppression. With that, the mythology of evil, power-hungry robots was born. You can see examples of this mythology at work in 2004's "I, Robot" starring the Fresh Prince of Bel Air. But what is a robot anyway? According to Tom Harris' definition in his article How Robots Work, the term "robot" is too vague:

If you consider all the different machines people call robots, you can see that it's nearly impossible to come up with a comprehensive definition. Everybody has a different idea of what constitutes a robot. The broadest definition around defines a robot as anything that a lot of people recognize as a robot. Most roboticists (people who build robots) use a more precise definition. They specify that robots have a reprogrammable brain (a computer) that moves a body. By this definition, robots are distinct from other movable machines, such as cars, because of their computer element. Many new cars do have an onboard computer, but it's only there to make small adjustments. You control most elements in the car directly by way of various mechanical devices. Robots are distinct from ordinary computers in their physical nature -- normal computers don't have a physical body attached to them.

Up until now, the obvious limitations in technological capabilities have relegated fears of a robot takeover to fiction. But with plans for a fully mobile EveR-2 in the works, and an entire industry to back it up, things could get weird really quickly. The general consensus is that developments in robotics and artificial intelligence are exciting and potentially very useful. Besides, scientists are still a long way off from creating the kind of robots anyone should fear. Tom explains that:

The real challenge of AI is to understand how natural intelligence works. Developing AI isn't like building an artificial heart -- scientists don't have a simple, concrete model to work from. We do know that the brain contains billions and billions of neurons, and that we think and learn by establishing electrical connections between different neurons. But we don't know exactly how all of these connections add up to higher reasoning, or even low-level operations. The complex circuitry seems incomprehensible.

Fully-functioning androids could prove useful in domestic and industrial life. Just maybe that old 1940s dream of a robot in every house could come true after all. You know, I always wanted my own Rosie.