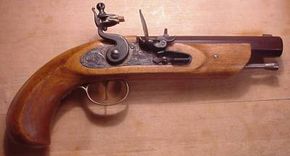 ­If you have ever studied American history, you are sure to have heard about the flintlock. The flintlock mechanism was the first reliable and relatively inexpensive system for firing a gun, and was hugely popular in colonial America. It was first developed in the mid-1500s and spread until, by 1660, the English Army adopted the flintlock system for its "Brown Bess" guns. The Brown Bess became famous because of its widespread use during the American Revolution. The flintlock remained popular until the mid-1800s, when it was replaced by the percussion-cap lock. By the time of the civil war, nearly all guns manufactured used the percussion cap. That means that the flintlock, as a technology, lasted about 300 years!

The flintlock gun and the flintlock itself are fascinating devices. There are at least four things that make them so interesting:

In this edition of HowStuffWorks, we will look at the flintlock itself as well as the guns that used it so that you can completely understand how it works. In the process, you will learn some amazing things about this important device! 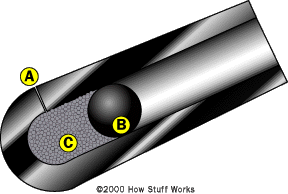 Guns have been around for an incredibly long time, and they started with the cannon. The World Book encyclopedia discusses the first significant use of a cannon at around 1350 AD, making it one of the oldest pieces of modern technology still in use.

­The first guns were essentially hand cannons -- small tubes that the user loaded with gunpowder and a ball and lit from the outside. Around 1400, hand cannons were fairly common, and people were even using four-barrel hand cannons! You loaded each little cannon separately and lit each one when you needed it.

The hand cannon required two technological improvements to make it into a useful tool:

A lock is the ignition mechanism for a gun, and several locks preceded the flintlock. For example, the matchlock was simply a piece of slow-burning rope that you would light ahead of time and then move into position to light the gunpowder. The slow-burning rope was attached to a lever that you moved with your finger to rotate it into position -- the first trigger. Obviously, the matchlock had several problems:

Despite these problems, matchlocks were common for 200 years because they were a better option than lighting the gunpowder by hand and they were cheap to build.

What the world needed was a way of igniting gunpowder in the barrel of a gun that was instant, reliable and fairly weatherproof. It also needed to be relatively inexpensive and easy to make. The flintlock was the technological marvel that solved all of these problems! 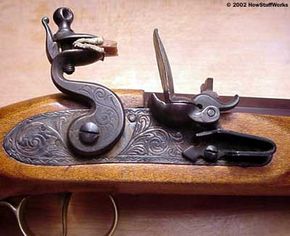 The Merriam Webster Dictionary describes a lock, in the context of a gun, as "The method for exploding the charge or cartridge of a firearm."

The basic goal of the flintlock is simple: to create a spark that can light the gunpowder stored in the barrel of the gun. To create this spark, the flintlock uses the "flint and steel" approach. The idea behind flint and steel is straightforward. Flint is an amazingly hard form of rock. If you strike iron or steel with flint, the flint flakes off tiny particles of iron. The force of the blow and the friction it creates actually ignites the iron, and it burns rapidly to form Fe3O4. The sparks that you see are the hot specks of iron burning! If these sparks come near gunpowder, they will ignite it.

The flint needs to move at high speed and strike the steel in such a way that the sparks fall into some gunpowder. You can see the four parts that make this happen in the picture below.

The main parts of a flintlock are:

You can see these parts labeled in the picture below.

These four pieces are all that the flintlock actually needs to accomplish its goal, but all flintlocks also solve the problems of loading the pan, protecting the pan from the weather and triggering the hammer, so there are three additional parts:

The mainspring presses against the tumbler and is able to rotate the hammer with a great deal of force. The sear engages the tumbler when the gun is cocked and holds the force of the mainspring. When you pull the trigger, it pushes the sear enough to release the tumbler and allows the hammer to drive the flint forward. You can see all of these parts in the image below.

The back of the flintlock

When you work with a flintlock and watch a flintlock in action you can see how all of these pieces work together. A flintlock has three positions for the hammer: uncocked, half-cocked and fully cocked.

Note how the shape of the tumbler locks the half-cocked position:

To use a flintlock, you follow these steps: (see the links at the end of this article for much more detailed instructions):

These three videos let you see and hear the flintlock in action: 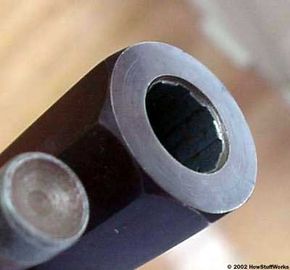 You can see the spiral grooves cut into this barrel.

The barrel of a flintlock is its own technological marvel, especially for the time. A blacksmith would take a flat piece of iron and beat it into a cylindrical shape around a mandrel -- a long rod of the proper diameter. By heating the iron to a high enough temperature in a forge, the blacksmith actually welded the seam along the length of the barrel to form a strong tube. This process could take days. Barrels ranged anywhere from pistol length (6 to 12 inches, 15 to 30 cm) to long gun length (40 to 60 inches, 102 to 152 cm).

The blacksmith could finish the interior of the barrel as either a smooth bore or a rifled bore. A smooth bore is just that -- smooth along the entire length of the barrel. The Brown Bess of the American Revolutionary War was smooth bored. So is any shotgun. Drilling out the tube with successively larger bits and then polishing with a reamer creates a smooth bore barrel.

Rifling a barrel is a way of increasing the accuracy of the bullet, whether the bullet is spherical or cone shaped. To rifle a barrel, you start with a smooth bore and engrave spiral grooves down the inside of the barrel. A typical pattern is one twist of the grooves in 48 inches (122 cm) of barrel length. As the bullet speeds down the barrel it engages the grooves, exiting the barrel with a rapid spin (between 1,000 and 3,000 RPM) and traveling at a speed of 1,000 to 2,000 feet per second (305 to 610 meters per second) through the air.

Once the barrel is smoothed or rifled, one end is closed off with a breech plug. Then, a small hole is drilled in the barrel to allow the flame from the flintlock's pan to enter the barrel and ignite the charge.

The expression "lock, stock and barrel" goes way back, and is directly related to the manufacture of guns. To assemble a complete gun you need all three parts:

If you have all three parts, you can assemble a complete gun. In colonial America, a person wanting a gun might have gone to a gunsmith for a complete firearm, or might have purchased the barrel and lock and created the stock him- or herself.

When you pull the trigger, the piece of metal within the stock pushes upward against the sear pin and releases the tumbler so the hammer falls.

A complete gun also included several decorative brass fittings for the nose and the butt of the gun, as well as a ramrod and a ramrod holder underneath the barrel.

The main challenge in assembling the gun, besides the obvious woodworking talent necessary to carve the stock, is getting everything to line up. The barrel has a hole in its side and the pan of the flintlock must align perfectly with it.

The hole in the barrel is tiny. It is hard to see in the picture above, but it is in the middle of a screw-in piece of this modern flintlock reproduction. 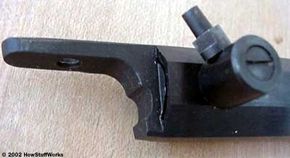 Flintlocks lasted a remarkably long time, but they were eventually replaced by a lock and ignition system called the percussion cap. The percussion cap was easier to load, more weather resistant and more reliable, so by the time of America's civil war, both Union and Confederate armies used percussion-cap guns exclusively.

The percussion cap was made possible by the discovery of a chemical compound called mercuric fulminate or fulminate of mercury. Its chemical formula is Hg(ONC)2 -- it is made from mercury, nitric acid and alcohol.

Mercuric fulminate is extremely explosive, and it is shock sensitive. A sharp blow, or even too much finger pressure, can cause it to detonate. By putting a small amount of mercuric fulminate in a pre-made cap (a tiny cup about the size of a pencil eraser) and affixing the cap to a nipple and tube leading into the barrel, the cap can ignite the gunpowder in the barrel.

The transition from flintlock to percussion cap is very minor, and many flintlocks were converted. The percussion lock is exactly the same as the flintlock in terms of the mainspring, hammer, tumbler, sear and sear spring. The hammer has uncocked, half-cocked and fully cocked positions just like the flintlock.

What the percussion lock does not have is the flint and frizzen. Instead, there is a nipple that accepts the cap, and this nipple contains a tube that leads the flame from the cap down to the main charge of gunpowder in the barrel. The hammer is shaped to strike the cap on the nipple and cover it so the nipple does not get blown off. These pictures help you understand the percussion lock:

The percussion lock did not last very long -- perhaps 50 years. Manufacturing processes were developing rapidly at the time and it became possible to integrate the cap, powder and projectile into a single metal package at low cost. These bullets are what we use today!

For lots more information on flintlock guns and other weapons, check out the links on the next page. 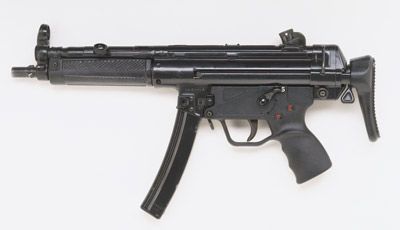 Up Next
How Machine Guns Work
Explore More 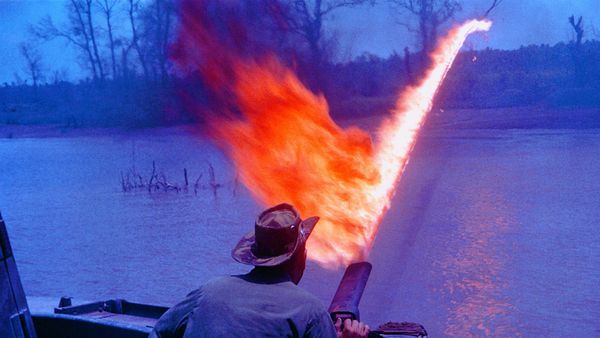