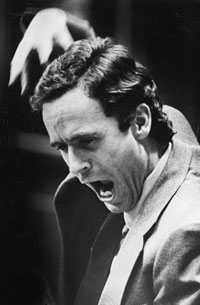 If Ted Bundy hadn't been a biter, it's possible he never would have been convicted of his crimes. See more forensics pictures.
Bill Frakes/Time & Life Pictures/ Getty Images

In January 1978, a manhunt was underway for one of the most notorious serial killers in the history of the United States. Ted Bundy was being held in a small jail in Glenwood Springs, Colo., while awaiting trial for the murder of Caryn Campbell. He escaped by sawing through a metal plate in the ceiling, going through the crawlspace above and walking out through the apartment of the jailer, who happened to be out for the night.

After traveling through Illinois, Michigan and Georgia, Bundy ended up in Tallahassee, Fla On Jan. 15, 1978, he went into the Chi Omega sorority house at Florida State University. He bludgeoned four students with a club and strangled them. Lisa Levy and Margaret Bowman were killed. Bundy also sexually assaulted Levy and bit her, leaving clear bite marks.

­Bundy was recaptured in February 1978 and eventually went on trial for the murders he committed in the Chi Omega house. The bite mark was the only piece of physical evidence that he left at the scene. Investigators took plaster casts of Bundy's teeth, w­hich showed that his teeth were unevenly aligned and that several of them were chipped. A forensic dentist was able to show that these casts matched with photographs of the bite mark from the body of Lisa Levy. This evidence was instrumental in his conviction; if Bundy hadn't bitten Lisa Levy while assaulting her, he may not have been found guilty.

The Bundy case is just one example of how our teeth can uniquely identify us. Forensic dentists (also known as forensic odontologists) have two different tasks: to identify the dead by their teeth and to determine who (or what) did the biting when bite marks are found. Let's start by looking at the system that all dentists use to distinguish one tooth from another.

One of the earliest known examples of forensic dentistry involved Agrippina, the mother of Roman emperor Nero. In 49 B.C., Agrippina ordered the death of her rival Lollia Paulina, who was in competition with her to be the wife of Emperor Claudius. Agrippina demanded to see Lollia Paulina's head as proof of her death, but she wasn't sure that her rival was dead until she noticed Lollia Paulina's distinctive discolored front teeth.

Another famous foray into forensic dentistry was that of Paul Revere, who in addition to being a blacksmith was also a dentist. He helped identify Revolutionary War dead who had been buried on the battlefield by their teeth and dental work. Revere was able to identify Dr. Joseph Warren, the man who sent him on his famous ride, because he had made him a partial out of silver wire and pieces of hippo tusk.