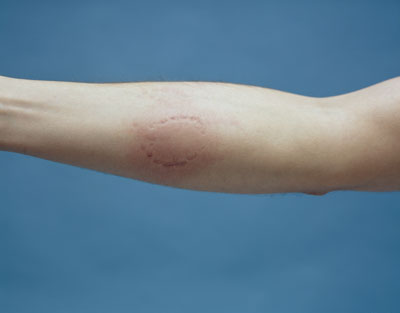 Bite marks are tricky because they're about more than just the teeth. Time can affect bite marks, and so can movement and pressure.
Benne Ochs/fStop/Getty Images

Although the Chi Omega murder trial had bite-mark evidence as its centerpiece, it's usually used in conjunction with other types of physical evidence. Bite-mark analysis is extremely complex, with many factors involved in a forensic dentist's ability to determine the identity of the perpetrator.

The movement of a person's jaw and tongue when he or she bites contributes to the type of mark that is left. Depending on the location of the bite, it's not typical to find bite marks where both the upper and lower teeth left clear impressions -- usually one or the other is more visible. If the victim is moving while being bitten, the bite would look different from that inflicted on a still victim.

If an investigator sees something on a victim that even resembles a bite, the forensic dentist must be called in immediately, because bite marks change significantly over time. For example, if the victim is deceased, the skin may slip as the body decays, causing the bite to move.

The first step in analyzing the bite is to identify it as human. Animal teeth are very different from humans' teeth, so they leave very different bite-mark patterns. Next, the bite is swabbed for DNA, which may have been left in the saliva of the biter. The dentist must also determine whether the bite was self-inflicted.

Forensic dentists then take measurements of each individual bite mark and record it. They also require many photographs because of the changing nature of the bites. Bruising can appear four hours after a bite and disappear after 36 hours. If the victim is deceased, the dentist may have to wait until the lividity stage, or pooling of the blood, clears and details are visible. The bite photography must be conducted precisely, using rulers and other scales to accurately depict the orientation, depth and size of the bite. The photos are then magnified, enhanced and corrected for distortions.

Finally, bite marks on deceased victims are cut out from the skin in the morgue and preserved in a compound called formalin, which contains formaldehyde. Forensic dentists then make a silicone cast of the bite mark.

Forensic dentists use several different terms to describe the type of bite mark:

A forensic dentist can tell a lot about the teeth of the biter based on the bite mark. If there's a gap in the bite, the biter is probably missing a tooth. Crooked teeth leave crooked impressions, and chipped teeth leave jagged-looking impressions of varying depth. Braces and partials also leave distinctive impressions.

Once investigators have identified a suspect, they obtain a warrant to take a mold of his or her teeth as well as photos of the mouth in various stages of opening and biting. They then compare transparencies of the mold with those of the bite-mark cast, and photos of both the bite mark and the suspect's teeth are compared to look for similarities.

Bite-mark analysis has been in the news in recent years due to its controversial nature. We'll look at some of these cases next.