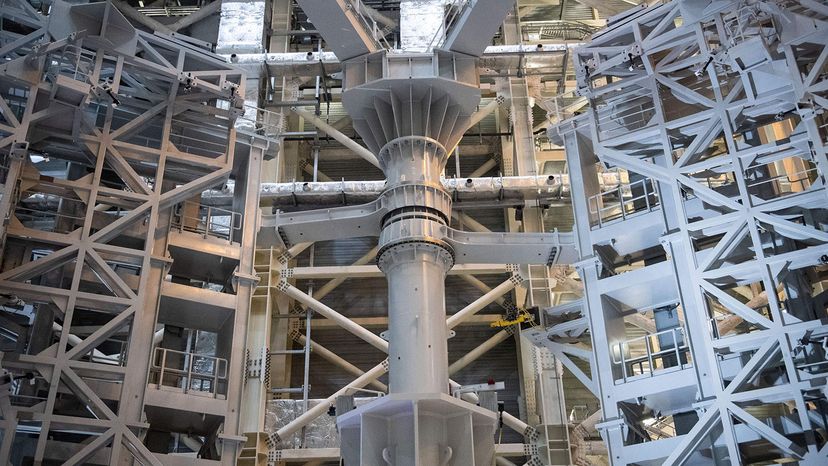 Back in 1925, British astrophysicist Arthur Eddington published a paper in which he theorized that stars such as the sun are powered by fusion reactions, in which hydrogen nuclei are combined to form helium. By the 1950s, scientists had begun to contemplate how that process might be used by humanity to generate abundant amounts of energy [source: Arnoux].

Since then, fusion's potential has continued to dazzle visionaries. A single gram of the hydrogen isotopes needed for a fusion reaction could generate as much energy as 11 tons (nearly 10 metric tons) of coal [source: Clynes]. And unlike a conventional nuclear reactor that utilizes a fission reaction, in which uranium atoms are split, a power plant with a fusion reactor wouldn't produce a lot of radioactive waste. (Its byproduct would be helium, an inert gas.) It also would be much safer, because fusion energy production wouldn't be based upon a chain reaction, so it couldn't go out of control and have a meltdown [source: IAEA].

Even so, fusion energy has long remained an elusive vision for the future, in large part because it's complicated and difficult to artificially duplicate the furnaces that power stars on Earth, without expending more energy than the process generates. Extreme temperatures and pressures are needed to overcome the forces that normally repel hydrogen atoms, and instead get them to combine their nuclei [source: Valich].

That said, scientists have made significant progress in recent years toward making fusion an eventual reality. "Most of the key physics questions behind fusion have been answered," Thomas Overton wrote in a 2020 article in Power, an energy sector publication. In 2010, a consortium of nations that includes the U.S., China, the European Union, India, Russia, Japan and Korea began building ITER, a facility that is scheduled to be sufficiently complete to begin "first plasma" testing in 2025. If all goes well, ITER could be demonstrating the ability to generate 10 times as much energy as it requires by the mid-2030s. While ITER won't generate electricity, it could pave the way for future fusion plants that will [source: ITER].

In this article, we'll learn about nuclear fusion and see how the ITER reactor will work.

Current nuclear reactors use nuclear fission to generate power. In nuclear fission, you get energy from splitting one atom into two atoms. In a conventional nuclear reactor, high-energy neutrons split heavy atoms of uranium, yielding large amounts of energy, radiation and radioactive wastes that last for long periods (see How Nuclear Power Works).

In nuclear fusion, you get energy when two atoms join together to form one. In a fusion reactor, hydrogen atoms come together to form helium atoms, neutrons and vast amounts of energy. It's the same type of reaction that powers hydrogen bombs and the sun. This would be a cleaner, safer, more efficient and more abundant source of power than nuclear fission.

There are several types of fusion reactions. Most involve the isotopes of hydrogen called deuterium and tritium:

Conceptually, harnessing nuclear fusion in a reactor is a no-brainer. But it has been extremely difficult for scientists to come up with a controllable, nondestructive way of doing it. To understand why, we need to look at the necessary conditions for nuclear fusion.

Isotopes are atoms of the same element that have the same number of protons and electrons but a different number of neutrons. Some common isotopes in fusion are:

­W­hen hydrogen atoms fuse, the nuclei must come together. However, the protons in each nucleus will tend to repel each other because they have the same charge (positive). If you've ever tried to place two magnets together and felt them push apart from each other, you've experienced this principle firsthand.

To achieve fusion­, you need to create special conditions to overcome this tendency. Here are the conditions that make fusion possible:

High temperature gives the hydrogen atoms enough energy to overcome the electrical repulsion between the protons.

High pressure squeezes the hydrogen atoms together. They must be within 1x10-15 meters of each other to fuse. 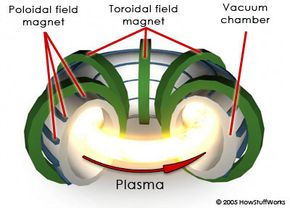 There are two ways to achieve the temperatures and pressures necessary for hydrogen fusion to take place:

Let's look at magnetic confinement first. Here's how it would work:

Microwaves, electricity and neutral particle beams from accelerators heat a stream of hydrogen gas. This heating turns the gas into plasma. This plasma gets squeezed by super-conducting magnets, thereby allowing fusion to occur. The most efficient shape for the magnetically confined plasma is a donut shape (toroid).

A reactor of this shape is called a tokamak. The ITER tokamak will be a self-contained reactor whose parts are in various cassettes. These cassettes can be easily inserted and removed without having to tear down the entire reactor for maintenance. The tokamak will have a plasma toroid with a 2-meter inner radius and a 6.2-meter outer radius.

Let's take a closer look at the ITER fusion reactor to see how magnetic confinement works.

"Tokamak" is a Russian acronym for "toroidal chamber with axial magnetic field." 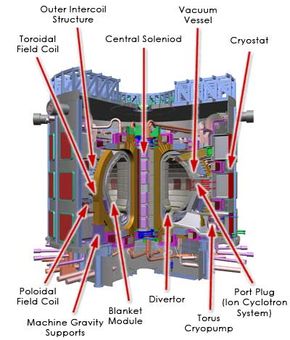 The main parts of the ITER tokamak reactor are:

Here's how the process will work:

Initially, the ITER tokamak will test the feasibility of a sustained fusion reactor and eventually will become a test fusion power plant.

Since the 1960s, the National Ignition Facility (NIF) at Lawrence Livermore Laboratory has been working upon a complex task—figuring out how to use lasers to ignite fusion reactions.

Inside the facility, as many as 192 laser beams are fired into a centimeter-sized hollow cylinder called a hohlraum, in order to generate X-rays that bombard a tiny capsule containing hydrogen isotopes. The goal is to implode the capsule, blow off its surface and heat the isotopes, duplicating the intense conditions found inside the cores of stars and giant gas planets. That implosion occurs so rapidly that it allows fusion reactions to take place before the fuel can disassemble [source: LLNL].

If the process works correctly, fusion ignition will occur at the moment when the alpha-particle energy going into the center of the capsule is equal to the energy losses from emitted X-rays and electron heat production. The goal is to create "burning plasma, " in which a wave of fusion reactions spreads into fuel surrounding that hot spot. If enough alpha particles are absorbed, the temperature of the fuel will be high enough to generate a self-sustaining thermonuclear reaction, leading to ignition [source: LLNL].

But as of 2020, reaching ignition in the NIF has proven to be a lot tougher than initially was envisioned. But as the NIF website notes, with each experiment, scientists gain more knowledge. The use of high-resolution 3-D modeling, for example, has helped them to better understand how the process works [source: LLNL].

In 2018, scientists at NIF achieved a record when they fired 2.15 megajoules of ultraviolet energy into the target chamber. They've also managed over the years to increase the implosion velocity and raise the pressure in the center of the implosion three or four times what they originally could generate. Most importantly, for the first time ever in a laboratory setting, they've seen initial signs of reaching the threshold where the energy generated by alpha particles stimulating fusion reactions in the fuel exceeds the kinetic energy from the implosion. Eventually, if they're able to contain the process better, they'll be able to achieve fusion ignition [source: LLNL].

­The main application for fusion is in making electricity. Nuclear fusion can pro­vide a safe, clean energy source for future generations with several advantages over current fission reactors:

For more information on nuclear fusion reactors and related topics, check out the links that follow.

In 1989, two researchers announced that they had created a fusion reaction at room temperature. The excitement turned to disappointment when other researchers who tried to duplicate the experiments were unable to reproduce the results, or else concluded that they were caused by experimental errors. Nevertheless, the idea of cold fusion is so intriguing that scientists haven't completely given up on it, decades later. In the 2010s, Google funded a multiyear investigation of cold fusion that included researchers from several universities and Lawrence Berkeley National Laboratory as well. The researchers ultimately published a 2019 Scientific American article in which they revealed that their efforts "have yet to yield any evidence of such an effect."