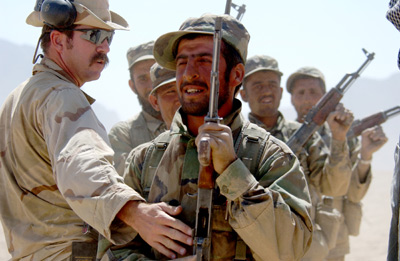 During war, the Green Berets operate alone in enemy territory. After the war, they serve to establish an environment where official agencies can organize and function. Once the United States is successful in defeating a foreign military, the toppled government leaves a power vacuum -- put simply, there is no one in charge.

The United States has a stated policy against nation-building.This means that the nation does not invade countries in order to change their structure to better suit the nation's interests. Although this is the official policy, once a government has been toppled, it's almost inevitable that the conquering power must take some action to restore order and influence government.

During their time spent amassing guerrilla armies, interacting with locals and gathering intelligence during wartime, the Green Berets are in a unique and useful position to identify the friendliest group that is likeliest to fill the power vacuum. This is part of the post-hostility (the period immediately following war) role that Green Berets play. By advising group leaders and offering the support of the United States, Green Berets act as underground diplomats and help foreign groups come to power after a government has been toppled.

One of the best ways for the United States to keep itself out of entering a war is to train other nations to defend themselves -- foreign internal defense. Detachments travel to foreign nations friendly to the United States and teach their military organizations in counterterrorism, counterinsurgency and other methods to maintain power and deal with threats from within and outside the country. Green Berets also serve as liaisons between the governments of those nations and the United States. This type of training and advising also extends to nations dealing with major drug trade organizations -- Green Berets' counterdrug operations.

Others Green Beret operations have evolved out of the changing face of the modern socio-political climate. Counterproliferation activities, for example, are a fairly recent duty charged to Special Forces groups. In this, Green Berets identify, find, and remove or render useless weapons of mass destruction (WMDs), also referred to as nuclear, biological and chemical weapons (NBCs).

Counterterrorist activities have also emerged as an important role the Green Berets play. In addition to carrying out counterterrorism operations around the world, the Green Berets have worked within the United States. Faced with a lack of Arabic-speaking agents and evidence of a real terrorist threat, the Federal Bureau of Investigation (FBI) enlisted the help of Green Berets who translated chatter and documents between suspected terrorists. The Green Berets were able to give the FBI the leads they needed, thwarting a terrorist attack planned for Dec. 31, 1999, at the Los Angeles International Airport [source: Truman National Security Project].

In the next section, we'll learn about the Green Berets' psychological operations.