Why does beer form a head but soda doesn't? 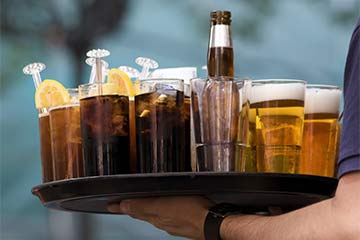 Why does a head of foam rapidly disappear on soda but stay in place on beer?
toos/Getty Images

Pour a soda into a glass and it will foam, but those tiny bubbles will quickly die down. Beer, on the other hand, will form a foamy head that sticks around long after it's been poured. Both are carbonated and poured from a glass or bottle, so why does beer form a head, but soda doesn't?

There's a lot going on in that foamy beer head. From the delicate interaction of gas and protein to alcohol content, beer is complex -- and we don't just mean the flavor. Like it or hate it, beer foam is a preview of what you're about to imbibe. As each beer bubble releases an aroma, the scent begins to influence your perception of the beverage and wet your anticipation as you prepare to drink it. Plus, a dense head of foam can make a beer feel more creamy and flavorful [source: The Kitchn].

Beer is, in fact, the only alcoholic beverage that will form -- and maintain -- a head of foam. The formation of this foam, also known as nucleation, involves a complex reaction of proteins. This includes large proteins and their smaller cousins, polypeptides. One protein -- specific to barley malt, which is used in the brewing of beer -- is worth a closer look. Lipid Transfer Protein 1 (LTP1) has an aversion to water. To escape the wet stuff, it will use a bubble of CO2 as a life preserver. Thankfully for LTP1, there are a lot of life preservers, because CO2 is produced in abundance during fermentation and is also introduced during bottling. As LTP1 clings to the CO2 and rises to the surface, it will form a protective coating around the bubble that makes it more difficult to pop. This helps beer maintain its head far longer than a soda or hard cider, but it's not the only factor at work. Additional hydrophobic polypeptides bond with the hops' iso-alpha acids and further lend stability to the foam [source: Wolfe].

Even with the potential for all these bubbles to stick around, a foamy head isn't a sure thing. Beer has a sweet spot: an alcohol content of about 5 percent. Too high or too low, and the foam will dissipate [source: Gammon].

Keep in mind that beer foam would be nothing without a glass in which to reach its full potential. The next time you drink a frothy glass of ale, take a closer look at the vessel. Are there nearly imperceptible scratches on the inside of the glass? Is there a brand logo etched into the glass's interior, perhaps at the bottom? This interruption of the flat surface creates a nucleation site, a series of cracks and scratches designed to encourage bubbles to continue to form and rise [source: Cooper].

These special adaptations, paired with beer's penchant for foam, mean its head will outlast soda's -- no matter how it's poured.

Author's Note: Why does beer form a head but soda doesn't?

Now that I understand why soda doesn't retain a foamy head like beer, I have a new rabbit trail to explore: Why doesn't soda lose its foam when you add ice cream to it? Oh, if only it would. There are few culinary peeves that rival the ever-present foam in an ice cream float. Scientists, let's work on that.