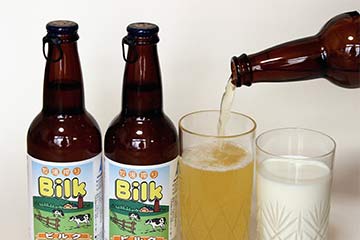 Back in 2007, a Japanese beer company thought they'd hit on a winning product. Bilk was a combination of beer and 30 percent milk. Although it did not curdle, people didn’t lap it up either and it's no longer made.
Junko Kimura/Getty Images

Perhaps the only trend more prevalent than craft beer is the rise of the beer-inspired cocktail. From beer-soaked hard lemonades to spritzy sangrias, beer cocktails are cropping up on signature menus and back porches across America. Beer blends so beautifully with flavored spirits and simple syrups infused with herbs or fruit that it's a wonder it didn't happen sooner. Except for one problem: milk.

Milk and beer just don't mix. Or do they? Is it true that beer will always curdle milk? To understand the phenomenon, we must first take a look at the pH levels in beer and explore the makeup of milk.

Beer, as with all alcohol, is naturally acidic. This acidity is measured by a pH value (pH stands for "potential hydrogen.") Whereas a pH of 7.0 is considered neutral and a pH of 7.1 or higher is considered alkaline, the pH level of most beer is in the 4.1 to 4.6 range, although as beer ages it can lose some acidity. Other issues during the brewing process, such as acid-producing bacteria, can further drop the pH level of beer [source: Carlsberg Group].

The acidity in beer doesn't play well with milk, and here's why: Milk, hald and half and heavy cream are comprised of proteins (called casein) -- fats and lactose that float, evenly dispersed, in water. These caseins roam freely around their liquid home in small groups known as micelles. Micelles have a negative charge to prevent them from grouping up together; this negative charge keeps milk liquid, not lumpy.

The amount of protection these groups of casein have against acid has everything to do with fat. In 2-percent or skim milk, for example, there is less fat to shield casein molecules than there is in heavy cream. And when it comes to protecting milk against curdling, this is important. Fat essentially coats the casein molecules, making them less susceptible to curdling [sources: O'Neil, Christensen].

Adding an acidic beer to milk has the same affect as adding any other type of acid, such as lemon juice. The milk becomes too acidic, and this acidity neutralizes the negative charge on the caseins grouped into micelles. Instead of remaining evenly distributed throughout the liquid, the micelles begin to clump together in larger and larger quantities. Eventually, these groups of micelles are large enough that they can be easily detected -- whether by texture or sight. When this happens, the lumpy milk is considered "curdled."

The higher the fat content in the milk, the less likely it is to curdle. This is why heavy cream, and sometimes half-and-half, can handle the addition of beer without so much as a casein clump. It also helps to use fresh ingredients -- both beer and cream -- and to introduce them slowly at cool temperatures. This is, perhaps, the best way for a bottle of stout, a scoop of ice cream and a splash of heavy cream to go on a date with one's taste buds [source: Christensen].

Does beer make milk curdle? Perhaps the bigger question centers on why you'd need to know. I can count the number of beer- and milk-infused cocktails I've encountered on one hand. But then again, I'm not a mixologist. I know one intriguing fusion I'd like to try though: a Guinness milkshake. From what I've read, the nutty bitterness of the beer and the sweet creaminess of the ice cream marry perfectly. And now I know that if I added some liquid, I'd be better off using cream because there would be less chance of curdling.

How Cotton Candy Works
How Ice Cream Works
People May Not Behave So Terribly When the World Is Ending, Video Game Shows