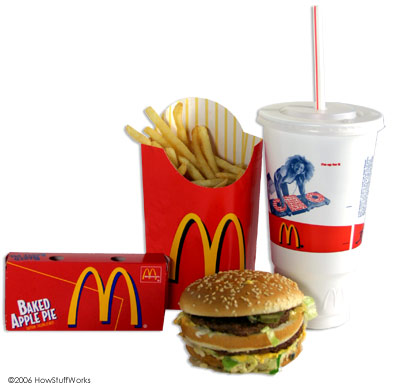 Mass-production is central to fast food. It allows restaurants to receive and store a large amount of food, then cook and serve it as needed. It also allows the companies that own the restaurants' name and trademarks to control what the food looks, smells and tastes like. But, in general, mass-produced fast food is a little different from similar dishes prepared at home:

In fact, according to McDonald's nutrition charts, if you eat a Big Mac, a large order of fries and a baked apple pie and drink a large Coke, you'll be consuming:

The United States Department of Agriculture (USDA) Food Guide recommends that most adults limit their daily consumption to about:

In other words, in one fast-food meal, you can consume almost as many calories and sodium and more fat than you should consume in a day. Even if you have a relatively small meal, like a burger, small fries and a small Coke (no dessert), you'll still consume 640 calories, 20 grams of fat and 700 milligrams of sodium. But most fast-food menus are built around large portions. Studies suggest that the size of the portions and the fact that the next larger size only costs a little more encourage people to eat a lot more than they normally would.

In addition, many of the fats in most American fast foods are trans fats, or partially hydrogenated oils. These oils taste good but increase people's risk of heart disease more than other fats do. Researchers believe that consuming more than 5 grams of trans fats per day increases a person's risk of heart attack by 25 percent. More than half of the large-sized fast-food meals analyzed in one study surpassed the 5-gram limit [ref].

The fat, salt and trans fat are part of the allure of fast food - they taste good. Some researchers also theorize that fast food's fat content and its ability to deliver lots of calories in one sitting give it an addictive quality. In addition, the high concentrations of salt, fat and sugar are necessary to make mass-produced food flavorful without making it too expensive.

The mass-production process involves sending lots of food through a factory in a short amount of time. For this reason, one sick animal or piece of waste can contaminate a large amount of food very quickly. Bacteria, viruses and parasites can spread to all of the food in a large mixing vat, or it can contaminate machinery used to process the food. This doesn't mean that mass-produced food is less safe than home-cooked food. In fact, most foodborne illnesses come from food cooked in the home. Instead, it means that when contamination does occur, it's likely to affect a lot of people at the same time.

Image by Coolcaesar, used under the GNU Free Document License After being involved in a foodborne illness outbreak in the 1990s, Jack in the Box became an industry advocate for food-safety practices.

For example, in 1993, 700 people became ill after eating hamburgers contaminated with e. coli O157:H7 bacteria. Two hundred people were hospitalized, and four died. The 0157:H7 strain of e. coli is particularly dangerous for the very young and very old, and many of the people who got sick were children.

These hamburgers were served at Jack in the Box restaurants in four states. The outbreak made international news, and Jack in the Box nearly went out of business. Although it was not the largest foodborne illness outbreak in history, it got people's attention and made many of them question the safety of fast food - particularly of hamburgers from Jack in the Box.

After the outbreak, Jack in the Box hired food scientist David M. Theno to help the chain prevent future outbreaks. Theno advocated an established system known as Hazard Analysis Critical Control Points (HACCP). HACCP identifies the steps in the food-production process at which a product can become unsafe to eat. Many restaurants and suppliers now use this and similar programs to help ensure the safety of food. However, books like "Fast Food Nation" suggest that some food-processing plants do not follow these procedures.

Regardless of whether the processing plants in question have improved since the publication of "Fast Food Nation," nearly every restaurant chain now gives its employees guidelines for food safety. These guidelines cover everything from proper hand washing to the proper order for cleaning surfaces in the restaurant. They also cover cooking times and temperatures, which would have lessened the severity of the 1993 Jack in the Box outbreak. Some chains employ people whose only jobs are to clean and inspect their restaurants, or the chains purchase inspection services from other companies.

Next, we'll take a look at the history of fast food.

Fast Food Nutrition in the Media

The nutritional value of fast food has gotten a lot of media attention in the last few years. "Fast Food Nation," by Eric Schlosser, focuses on how fast food is made and marketed. Schlosser has written a follow-up book for adolescent readers called "Chew On This," and a film version of "Fast Food Nation made its debut at Cannes Film Festival in 2006.

Fast-food and other restaurant corporations have accused these books and movies of being inaccurate, reactionary and biased.