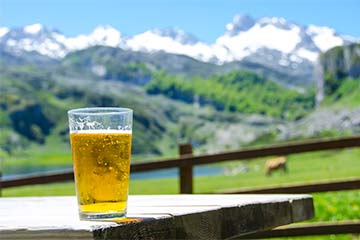 Beer, like wine, does continue to age after it is packaged. Unlike wine, this isn't really a good thing.
iStock/Thinkstock

Your parents are downsizing. You've offered to help, but begin questioning your decision-making skills the moment you're assigned attic duty. As you shuffle boxes of dusty decorations, trunks of old clothes, college mementos and (for reasons you can't quite fathom) a complete set of dining room chairs, something catches your eye. Atop a horizontal wall stud sits a forgotten bottle, and not an empty one at that.

It's beer, a brand you don't even recognize, still capped. Feeling adventurous — and also a bit desperate — you wonder what it would be like to chug attic-tempered beer that's been aged a solid decade or more. Has it matured like wine? Or, has it become flat and lost its alcohol content altogether?

Beer, like wine, does continue to age after it is packaged. Unlike wine, this isn't really a good thing.

As beer sits, it will continue to ferment. But don't be fooled into thinking your beer will become better with age. Beer doesn't become unsafe to drink as it matures, but it will begin to taste flat — either because it loses flavor or develops an off-putting flavor profile. The flavor will be best during the first few months after it is bottled. Once the flavor peaks, the proteins that give beer its distinct taste will start to break down, and the beer will become a one-note wonder (or disappointment, as the case may be).

The exception to the "drink it quick" rule is for beer that has a greater amount of hops and a higher alcohol content (usually 9 percent or more) that has been brewed specifically for aging. Its proteins will still break down, just as with any other beer, but it will have been engineered to withstand the process in the first place. Most are "living beers" that still contain yeast from the brewing process and that will develop fuller, richer flavors over time [sources: The Kitchn, The Professor's House].

But what about alcohol content? As a beer ages, will its potency wane too? In a word, no. The alcohol content of beer (and wine, for that matter) is determined during the fermentation process and will not change over time. During fermentation, yeast converts sugar (or any carbohydrate source) into carbon dioxide and ethanol alcohol. As the yeast converts sugar into alcohol, the alcohol eventually overwhelms the yeast and kills it. When the yeast dies, it cannot produce more alcohol [source: Wine Spectator].

So why does one type of beer have a greater alcohol content than another? The concentration of alcohol is the result of the type of yeast strain used during the fermentation process. The majority of yeast strains can handle an alcohol concentration of 10 to 15 percent before they succumb to its toxicity; the resulting beer can range from 5 to 21 percent of alcohol by volume — the measurement used to illustrate what portion of the finished liquid is alcohol [sources: Alba-Lois, Beer Advocate].

I once visited a museum that featured items pulled from an 1800s-era shipwreck. Among them, beer. Still bottled. I'd always wondered what it would be like to crack open a bottle of that beer. Would the sip it offered be like stepping back in time? Well, after researching this article, I can put that question to rest. Turns out, this remarkably aged beer probably wouldn't taste good at all — and it certainly won't proffer the tastes it once did.