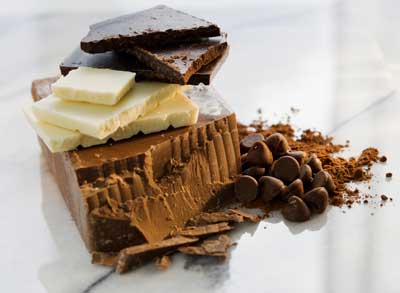 Chocolate is the most commonly craved food in the United States.
Tom Grill/Getty Images

If we were to compare stomach hunger and mind hunger to different types of telephones, stomach hunger would be a one-line analog phone, and mind hunger would take the form of a high-end cell phone with camera, Internet and MP3-player capabilities. Far more elaborate and complicated, mind hunger isn't entirely necessary for survival. In fact, scientists have largely debunked the theory that food cravings are our bodies' ways of nagging us that we need a specific type of nutrient [source: Pressman and Clemens]. That is, unless you consider macaroni and cheese, chocolate chip cookies and bacon to contain valuable nutrition.

So why do people generally crave items high in fat and calories? The answer lies in the brain. Fatty, sugary foods release chemicals called opioids into our bloodstream [source: Wright]. Opioids bind to receptors in our brains and give us feelings of pleasure and even mild euphoria. In this way, our bodies, at least momentarily, give us a thank you for ingesting that box of truffles or whatnot. This effect from the opioids, contained in the fat of red meat for instance, may be one of the reasons someone might encounter trouble maintaining a vegetarian lifestyle [source: Barnard].

Understanding the parts of the brain that are activated when we crave specific foods provides another clue to this gastronomical mystery. In 2004, participants in a study were asked to think about a favorite food. The participants' resulting fMRI images displayed three primary areas that lit up: the hippocampus, insula and caudate [source: ScienceDaily]. The hippocampus, located in the temporal lobe, filters sensory data and puts it in short-term or long-term memory. Located on either side of the brain, the insula helps control your social emotions by interpreting your physical state [source: Blakeslee]. Then, the caudate nucleus, within the striatum deep in the center of the brain, helps control the dopamine reward system. Dopamine is a feel-good hormone also produced during sex, compulsive gambling and drug activity.

This type of dopamine stimulation and chemical reward that we obtain from fulfilling food cravings has been compared to drug addiction because both behaviors follow similar neural pathways. The pleasure and reward that we derive are simply milder versions of those that drug addicts experience when they get high. Neurologically speaking, that fast food joint isn't much different from a person selling drugs.

Psychological factors can also influence the intensity and nature of our food hankerings. Studies on mood have found that our emotional state normally has a greater impact on cravings than hunger [source: Hill]. Diet influences our levels of the hormone serotonin, which regulates our disposition [source: Pressman and Clemens].

On top of that, our sensory memories of these foods, which elicit that chemical satisfaction, reinforce the cravings. Where do those earliest culinary sensory memories come from? To find the answer, we'll turn back the clock to a time before you could distinguish between a carrot and a cookie.