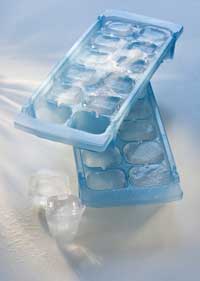 Does this look like dinner? People with an unnatural affinity for ice may have an eating disorder called pica.
Tom Grill/Getty Images

In addition to the mood swings and sluggishness that often accompanies premenstrual syndrome (PMS), a spike in unhealthy food cravings can also occur. According to the Mayo Clinic, a woman's monthly cycle lowers her serotonin levels, which accounts for the mood swings and food cravings. As discussed earlier, mental state correlates to the frequency and strength of cravings, as though the body wants you to stimulate its reward system.

Perhaps the ultimate hormonal surge, pregnancy can send a woman's food cravings into overdrive. Who hasn't heard tired anecdotes about midnight runs to the store for ice cream and pickles? Pregnant women seem more or less expected to have bizarre and overpowering dietary urges such as a newfound adoration of jalapeño peppers or salty Chinese dishes. However, scientists have yet to pinpoint the exact reason behind pregnant women's culinary cravings.

There's a good chance that the odd diets have something to do with women's altered levels of hormones, especially estrogen, during that time. A pregnant woman's sense of taste and smell becomes more acute, leading to strong aversions to certain pungent items such as coffee and cigarettes. Her cravings focus more on intensely sweet, salty or spicy foods. Although some claim that it's the body's way of ensuring that the fetus receives adequate nutrition, this concept doesn't hold much weight since commonly cited pregnancy foods such as pickles and ice cream contain little health value [source: Walker and Humphries].

Among the more strange food cravings is the phenomenon called pica, which is more prevalent among children and pregnant women. Pica, a physiological eating disorder characterized by the desire to eat nonfood items, comes from the Latin word for "magpie," as the bird isn't a very picky eater. Studies of this habit have found that around 20 percent of pregnant women may go through it [source: Bowerman].

What oddball items do they munch on? A study of pregnant women experiencing pica found that about half of them ate ice, a condition called pagophagia [source: Rainville]. Around 15 percent of the other participants ate some form of dirt, clay or cornstarch [source: Rainville]. This practice of dirt eating, or geophagia, is more prevalent in the deep South of the United States and African countries including Kenya and Uganda, where some people may use it as a way to relieve stomach pain or to practice religious customs [source: Bowerman].

This type of pica frequently relates to iron deficiencies in pregnant women, although some researchers think it's related to texture rather than nutrition [source: BBC]. Nevertheless, people with anemia also have a higher likelihood of encountering pica. In the study of pregnant women mentioned above, the participants had lowered levels of hemoglobin, the iron-carrying pigment in red blood cells, when they gave birth [source: Rainville]. Although ice wouldn't augment one's iron stores as dirt might, it may soothe tongue pain that sometimes accompanies the metal's scarcity in the body [source: Bowerman]. Because the habit could wreak havoc on the digestive system, if you suspect you're dealing with pica, you probably want to see a doctor.

If you're jonesing for more information on food cravings, check out the links below.