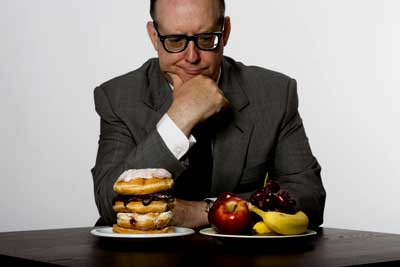 Decisions, decisions. If you want to lose weight, give in to that doughnut craving every once in a while, but watch yourself.
Cal Crary/Getty Images

Suppressing food cravings can prove a Herculean task. Like trying to get the lyrics of a song out of your head, the longing for loaded baked potato soup can haunt you for hours. But repeatedly succumbing to your every gastronomic desire can negatively affect that dopamine reward system. Just like drug addicts, someone who continually eats chocolate, for instance, raises the threshold of that reward, which means that it gradually takes more and more brownies to regain that initial pleasure [source: Wright].

According to the Centers for Disease Control and Prevention, around one-third of American adults are obese. As that number has risen, more research has gone into managing food cravings (usually high in fat and calories) because studies have shown that it's essential for dropping pounds [source: ScienceDaily]. But doing so has proven trickier than it may initially seem.

Consider the appetite-suppressing hormone leptin, which is produced in fatty tissues. Obese people have greater than average amounts of leptin because they have more fat in their bodies. However, that doesn't translate to a smaller appetite [source: Wright]. Rather, as your Body Mass Index (BMI) increases, so does the frequency of food cravings [source: Squires]. Mentally curbing your cravings can also have unintended results. A 2007 study by Hertfordshire University found that women who tried to quit thinking about eating chocolate ended up eating 50 percent more than those who expressed their desire for the candy [source: BBC].

Limiting your caloric intake through dieting can be a tricky business because your body naturally generates more ghrelin, the hunger hormone, when it thinks you're in danger of starvation. That kick-starts your appetite, which can then open up a Pandora's box of cravings.

Yet all hope isn't lost. Psychologists and nutritionists advise giving in on occasion. The key is limiting the frequency. In a six-month study on the effects of calorie restriction in regard to weight loss, the participants who satisfied their food cravings the least lost the most weight [source: ScienceDaily]. That is to say they didn't quash every craving, but they learned to manage them.

An interesting aspect of dieting and food cravings is that the calorie restriction isn't the sole contributor for a spike in daydreams about doughnuts. Rather, research indicates that anxiety or boredom surrounding dieting is more to blame [source: Hill]. For that reason, experts stress the importance of variety in your diet. There appears to be an inverse relationship between the amount of a certain food you eat and the frequency that you crave it. Spanish women, for example, eat more chocolate than American women and also report fewer cravings for it [source: Pressman and Clemens].

However, women of all sizes may have a bumpier road to travel when dealing with food cravings. Thanks to monthly hormonal shifts and pregnancies, many females are delivered the double punch of mind- and body-related food cravings on a regular basis.