Why do pineapple enzymes tenderize steak -- and your tongue? 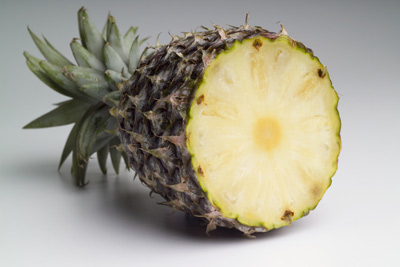 Columbus first laid eyes on a pineapple in 1493, although pineapple wasn't native to the Caribbean islands where they met [source: Kew]. Though commonly thought of as a traditional Hawaiian food, the sweet, spiky fruit originally hails from Brazil.

In the 1890s, researchers began isolating and studying bromelain, a natural mixture of two proteases (protein-digesting enzymes) found in pineapples. They discovered that bromelain is quite effective at dividing proteins such as the collagen in steak, as well as in your tongue.

Although bromelain is found in every part of the pineapple, it's most plentiful in the stem. Most commercially grown pineapple is sliced, canned or juiced. The remains are rich with this corrosive substance, which is then extracted. Powdered bromelain is used for tenderizing meat, as well as treating inflammation, swelling, indigestion and even excessive blood clotting.

The compound separates the all-important peptide bonds that link the proteins in collagen. Since the collagen gives the muscle tissue its shape, once it's broken down, the muscle tissue begins losing firmness. If you left meat for a day or two covered with bromelain, it would be noticeably mushy, so much so that you wouldn't want to eat it. When used shortly before cooking, however, bromelain efficiently softens the steak for chewing, but leaves it firm enough to enjoy its taste. The enzymes are neutralized by heat of about 158 degrees Fahrenheit (70 degrees Celsius), so they stop working once cooked.

Pineapple's secret ingredient works on more than just steak though. If you place a fresh slice of the fruit inside a cup of Jell-O as it cools (the final step after dissolving powdered gelatin into boiling water), the solution will remain liquid, instead of "gelling," as it normally would. This is because bromelain breaks down gelatin, leaving it unable to hold a structural form.

But what about your poor tongue? Is it subject to the same degradation that steak is when you eat pineapple? Yes, but not for long. The process for "tenderizing" your tongue is the same as in the steak -- the bromelain begins to separate the peptide bonds that build amino acids into proteins. The good news is that your tongue regenerates these cells, so you won't be left with permanent damage. Once you have consumed the pineapple (or bromelain), your body begins metabolizing it and soon renders it harmless.

After years of harvesting and cutting pineapples, workers' hands undergo great damage. It was once thought that bromelain exposure gradually erased fingerprints, but this isn't true. Unless the finger itself is essentially destroyed through severe burning, for example, your fingerprint will always return after a hand injury.

If all this talk of pineapple and steak leaves you hungry for more, explore the links below.

In Pursuit of Cold, Clear Beer

In addition to tenderizing meat, bromelain is used to "chill-proof" beer. When beer is cooled to about 32 degrees Fahrenheit (zero degrees Celsius), proteins form bonds with other elements in the beer. This doesn't affect the taste of the beer, but it makes it appear cloudy. Bromelain is added to beer to prevent this from happening. Even without chill-proofing, the cloudiness goes away once the temperature of the beer rises. In a store's beer cooler though, consumers are generally going to reach for a clear beer over something that resembles a thick gruel.