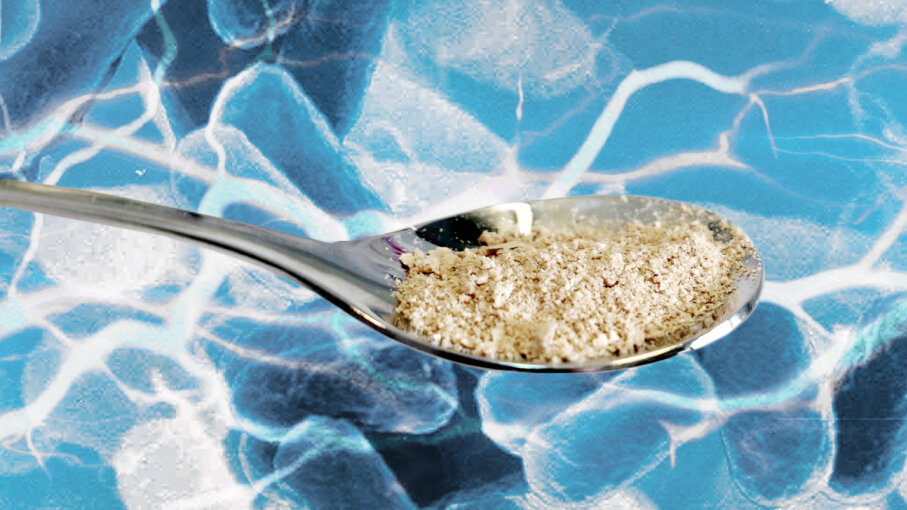 A spoonful of the protein powder produced from microbes, carbon dioxide, water and a steady current of electricity LUT/Science Photo Library/Getty Images

Choose three ingredients to make a nutritious meal and it's unlikely you'd pick carbon dioxide, water and microbes. But researchers in Finland are developing a way to zap that simple recipe with electricity inside a bioreactor to create a powder that's about 50 percent protein and 25 percent carbohydrates.

The edible powder could be mixed into a shake or turned into a tofu-like food for people. It also could be transformed into feed for animals. Because it's processed inside in a bioreactor — similar to how beer and Quorn, a British meat substitute, is made — it doesn't require the tremendous amounts of land, water or other resources necessary for large-scale agriculture and doesn't emit greenhouse gases into the atmosphere.

"We detach the whole process from the land," says Jero Ahola, a professor in the department of electrical engineering at Lappeenranta University of Technology. If solar power is used to produce the electricity, the process is about 10 times more efficient at producing food than conventional agriculture that relies on soil, says Ahola.

For this proof-of-concept endeavor, the bioreactor used was the size of a coffee cup, and the process to produce 1 gram of the protein took about two weeks. Ahola and colleague Juha-Pekka Pitkänen, a principal scientist at VTT Technical Research Centre of Finland, say they are working on plans to build a larger bioreactor, about 6 liters (1.6 gallons) in size, by early next year. After that, they'll apply for additional funding to scale up the system even more, building a 2-cubic-meter (71-cubic-foot) bioreactor that can produce 5 kilograms (11 pounds) of powder per day. Imagine one of those 10-pound bags of flour or sugar, and you get the idea.

"We think that we would be able to scale it up rather soon now that we have got it working," says Pitkänen.

At the moment, the system is running at about 26 percent efficiency, meaning that 26 percent of the electricity is going directly toward turning the mixture into food. The team says they feel confident that they can almost double that to achieve upward of 50-percent efficiency.

To make the powder, Ahola and Pitkänen combine carbon dioxide, water and Knallgas bacteria with ammonium, sulfate and phosphate salts, which act like fertilizers. When the ingredients are inside the bioreactor, the scientists deliver a constant electric current through the mixture. The electricity splits the water molecules, which are made of hydrogen and oxygen atoms. Once freed from its molecular bond to oxygen, the hydrogen can be used by the Knallgas bacteria as energy, which helps the bacteria take in CO2 and turn into protein.

"The first real application could be in the desert, feeding people in Africa," says Pitkänen.

Although electrifying a bacterial concoction to make food seems futuristic, it actually dates back to the 1960s, says Pitkänen, when renowned German microbiologist Hans Günter Schlegel and co-author R.M. Lafferty published a research paper in the journal Nature describing the notion. After that, Soviet and NASA scientists began experiments to see if they could use microbes to create food for astronauts.

"They were investigating how one could turn CO2 and microbes into microbial biomass," says Pitkänen.

But the technology for efficiently generating electricity in space was not well-developed. Space ships are a closed system, where everything must be used or recycled. Carrying heavy fuel onboard to make food didn't make sense, and renewable energy was still in its infancy. For years, the idea of turning microbes into food fell behind.

Today, with renewable energy on an upward trajectory, generating zero-emission electricity and using it to convert a brew of water, CO2 and microbes into a powdery protein makes more sense. With a renewed interest in human space travel, food from electricity could find its way into the cosmos.

In the meantime, it has plenty of applications on Earth. Today, 795 million people worldwide lack enough food to eat. A nutritious, high-protein powder could help address global hunger. It may also help the planet overall reduce greenhouse gases, and Finland specifically, which has set a goal to lower CO2 emissions by 80 percent by the year 2050.

"Our Earth is becoming like a kind of spaceship," says Ahola. "We realize that we are approaching limits and we have to think of similar kinds of solutions for these problems."

Now That's Interesting
The researchers relied on a bioreactor to make their protein powder, and they suggest that consumers might have their own home reactors in the future.