Browse the article How Can Sugar Explode? 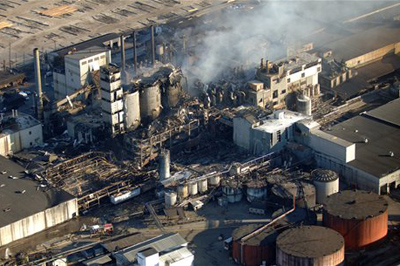 Sugar dust is believed to have caused this explosion at the Imperial Sugar refinery in Georgia in February 2008. See more building explosion images.
Stephen Morton/AP Photo

The cobwebs have hardly cleared from your mind as the refrigerator door swings lazily shut and you sit down at the breakfast table. The coffee is still brewing, and you're hardly alert. You read the paper as you pour your whole grain cereal into your bowl, top it with milk, and ladle on heaping spoonfuls of refined sugar. As you retrieve the last bit of sugar from the bowl, the spoon clinks against the side of the porcelain and — BOOM?

Sound like an outrageous fabrication? It is. But what's crazy is that sugar actually can be dangerous; not to the consumer, but to the people who operate the refinery.

­The little-known danger associated with refining sugar came suddenly into international focus on Feb. 7, 2008, when the Imperial Sugar Company refinery in Port Wentworth, Ga., suddenly and violently exploded. Fire officials believe that an accumulation of sugar dust within the refinery ignited and caused the incident [source: CNN].

Georgia Fire Commissioner John Oxendine called the blast "the worst industrial accident" in the 14 years of his tenure [source: Reuters]. Indeed, the explosion was massive. The blast tore away entire sections of the huge refinery, exposing the steel girders and concrete slabs that make up the skeleton and foundation of the plant. Seven workers were killed in the blast and resulting fire. Twenty employees were treated for severe burns; 17 of those were kept in medically induced comas [source: Houston Business Journal].

Sugar dust? How exactly can sugar explode, let alone kill six people and tear apart thousands of tons of steel and concrete? Find out what we learned about sugar explosions on the next page. 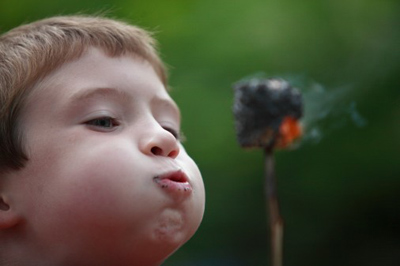 Everyone who's ever cooked marshmallows around a campfire knows they burn. So how can sugar explode?
Chris Butler/Aurora/Getty Images

Though you may not normally think about it, one of sugar's properties is that it is flammable. Anyone who's had a bad experience caramelizing a crème brûlée can attest to that. A flaming marshmallow is another good example of burning sugar. The thing is, marshmallows don't explode. If they did, the Campfire Girls would have to have something else for dessert after cookouts. So how can sugar explode?

As it turns out, there's nothing unusual about sugar that makes it flammable. In fact, prior to the Imperial Sugar refinery disaster, there were 281 volatile dust explosions in the United States between 1980 and 2005, costing 119 lives. These explosions were caused by dust from grains, wood and other materials [source: Chemical Safety Board].

"Any organic material can burn," says University of Arizona chemistry professor Dr. Steve Brown. But for an explosion to take place, especially in the case of volatile dusts like sugar, a few other factors must be involved.

Imagine you're in an enclosed room coated with a thick layer of sugar dust. You smack your hand down on a table top, disturbing some of the sugar dust and dispersing it into the air. If you are unwise enough to light a match, and you could see the ensuing explosion in slow motion, you'd notice that what appears to be a single, instantaneous burst is actually a series of chain reactions. The sugar dust particle ignited by your lit match ignites another particle and so on. The entire process is fueled by the oxygen in the room, and since the dust is suspended in the air, it interacts with the oxygen more easily than when it's settled on the table. This is also why marshmallows don't explode; the sugar inside the dense confection doesn't have much oxygen to interact with [source: CNN].

The force of the blast depends on the enclosed room. The chain reaction produced from the ignited sugar dust particles produces energy. This produces compression and expands the volume of the air. When this buildup occurs faster than the flame burns — as can be the case indoors — you have an explosion.

Whether or not a room filled with sugar dust will explode also depends on a couple of other factors. The size of the sugar dust particles is important. The National Fire Protection Association has concluded that dust particles must be 420 microns across to be volatile. This sounds small, sure, but it's actually more than four times larger than the average grain of table salt. It also doesn't take much dust to pose a threat. The NFPA says only 1/32 of an inch of volatile dust covering just 5 percent of the surface area of a room "presents a significant explosion hazard" [source: Chemical Safety Board].

With so much sugar dust created by the refining process, it's hard to imagine the Imperial Sugar refinery tragedy wasn't caused by a dust explosion. Plus, Choven points out, a sugar refinery couldn't deal with volatile dust using the traditional method of humidifying rooms, since wet sugar would gum up the machinery.

For more information on explosions and other related topics, visit the links that follow.