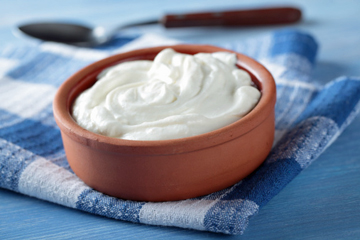 Greek yogurt is thicker than the yogurt you'll typically find on the shelves, because most of the whey is removed in its manufacturing.
iStockphoto/Thinkstock

For being so tiny, probiotics have created quite the stir in biological research. Some companies maintain that probiotics stop a proliferation of unfriendly bacteria that otherwise might result in bad breath (from periodontal disease and tooth decay), and certain kinds of infections. Also, probiotics may help replace some of the good bacteria that have inevitably been killed off by antibiotics that you take when you're sick.

Microbiologists are studying all of these claims in depth, especially since yogurt consumption is up, but there has not been enough research on most strains to be conclusive. However, there's some promising evidence that they may help the immune system and reduce the risk of diarrhea.

As we know, bacteria in yogurt give it that special taste. They also break down the lactose in the milk. So, for the 30 to 50 million people who have trouble digesting that milk sugar, yogurt is a great way to get enough calcium. Another way to go if you're lactose intolerant would be to eat soy yogurt, which has also been fermented with live cultures. However it usually does not have as much calcium as milk-based yogurt.

Speaking of protein, if you want more of it (the Institute of Medicine recommends about 8 grams of protein for every 9.1 kilograms of body weight, per day), traditional, full-fat Greek yogurt is probably your best bet. It has a less sodium, fewer carbohydrates and a creamier taste because it's strained to remove most of the whey -- that liquid that settles on top of the curd. Go for the low fat Greek yogurt if you're watching your weight.

A study in the International Journal of Obesity says that low fat yogurt may help you lose weight. Researchers found that the dairy product sped up the body's fat-burning ability. The main finding in this and other research articles like it is that if you're substituting low fat yogurt for a fatty meal or snack, you can probably lose weight. If you're snacking all day long on whole-milk yogurt or yogurt-covered raisins, it's not. (By the way, the "yogurt" in yogurt-covered raisins is mainly sugar.) The National Dairy Council recommends three servings a day of low fat or fat-free dairy to help support weight loss [source: NDC].

As with any food, if you're worried about calories, you should check your yogurt's label. The same is true if you try to avoid artificial sweeteners. The light or no-fat versions are made with aspartame, sucralose or saccharin. And even those versions often contain a good deal of sodium to preserve the yogurt.

You can avoid eating preservative-laden yogurt simply by learning how to make your own. And you can use yogurt as a substitution for oil or butter when you bake.