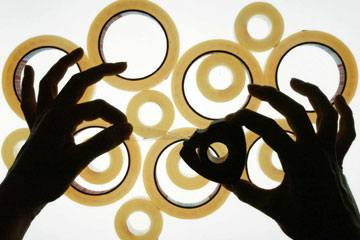 It may be as ubiquitous as running water. Some might go so far as to say it's nearly as convenient. Before 3M introduced adhesive tape in 1925, the primary means of adhesion were pretty permanent and messy.

Masking tape, that 1925 creation, was intended to solve a very specific problem: applying two-toned paint jobs to cars, which were popular at the time.

Before masking tape, auto shops were "masking off" for each color application using glue and paper. Peeling off the paper ruined countless paint jobs. Richard Drew, a young 3M research assistant, witnessed one such ruined job and the furious cursing that followed. Drew, who had absolutely zero experience in adhesives, decided, apparently on the spot, to create an adhesive that could be removed from dry paint without peeling it off [source: ACS]. Two years later, masking tape was introduced.

Nor would everyday household fixes. During the Great Depression, when most people had to repair things like tablecloths and upholstery instead of replacing them, clear tape offered a fast, cheap, aesthetically satisfying solution. As a result, while many companies were closing their doors or barely getting by, Magic Tape kept 3M not just afloat but thriving [source: ACS].

Today, adhesive tape comes in cellophane-finish for wrapping and matte finish for labeling. Hefty duct tape is a staple of many home repairs, while double-sided tape tacks up posters. Brown tape wraps packages and stretchy adhesives work for bandaging. Joining two materials with tape has been so common for so long that people almost never think to ask "how does it do that?"

Turns out, tape is rather remarkable. It's not adhesion itself but the specific type of adhesive used on tape that makes it indispensable in daily life. The "sticky" used in sticky tape is different in that it relies primarily on physical processes, not chemical ones, to adhere.

The Science of Stickiness 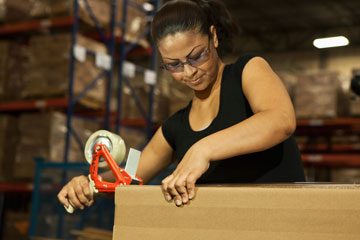 In modern times before tape, glues and epoxies did most of the sticky work. But they had serious drawbacks, especially in household use. Messiness, permanence and drying to a hard finish all made traditional glues, which typically bond by chemical means, less-than-great for small, quick everyday jobs.

The adhesives used in tape work differently. They're called pressure-sensitive adhesives (PSA) and include materials like silicones, acrylics and rubbers -- all polymers to which a tacky resin is added to increase stickiness [source: ThomasNet]. These PSAs rely on physical reactions, not chemical ones, to adhere. This contributes to qualities like removability and flexibility -- some of the stuff we love most about tape.

In a pressure-sensitive bond, there are two main processes at work: wetting and van der Waal's forces. The former establishes adhesion. The latter makes it stronger [source: Hyperphysics].

Wetting is pretty simple. In this case, it refers to the way a solid adhesive penetrates a substrate (the material the tape is applied to). The solid adhesive used in tape is good at wetting because it has a low surface energy, meaning its surface molecules are moving around a lot, or are energized, causing looser bonds. This trait allows the molecules of the adhesive to flow relatively easily, even though it's in solid form, into the pores of the substrate material. All it takes is a little pressure. And the better the ability to flow into the substrate, the stronger the physical bond.

Some adhesives will form stronger bonds over time as molecules seep deeper into the substrate material. From the start, though, a different physical phenomenon adds to the strength of pressure-sensitive adhesion. Molecular attractions called van der Waal's forces take effect even before pressure is applied to the tape.

Van der Waal's forces are weak attractions between molecules that may not normally have positive or negative charges. Some primarily neutral molecules whose protons and electrons aren't evenly distributed throughout can at times exhibit charges, known as dipole moments [source: Hyperphysics]. These charges, or polarities, allow them to form physical bonds with other charged molecules; they can, in fact, induce charges in other mostly neutral molecules by mere proximity [source: Hyperphysics].

Adhesion is only part of the equation, though. The beauty of adhesive tape lies as much in its design as in its bond. 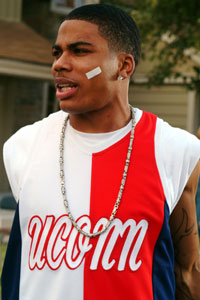 Adhesive tape even appears as the occasional fashion statement: For rapper Nelly, pictured on the shoot for music video "Dilemma" in 2002, it was a signature look.
© Markus Cuff/Corbis

Every time we pull some tape off a roll -- to wrap a present, hang macaroni art, temporarily fix a leaky pipe or seal a package for shipping -- we probably miss the genius of the roll itself. Most notably, why does the adhesive stick to the backing and to the substrate but not to itself?

Were tape not in roll form, it would likely be somewhat difficult to toss in a junk drawer. And "adhesive" that is not adhesive tape is usually glue -- drippy and permanent. It's the tape part that makes the product so neat, so compact and so easy.

The process of making tape is fairly uniform. All adhesive tape has four components [source: ACS].

The layers are applied in large sheets, which are finally rolled up and cut into the 1-, 2- or 3-inch-wide rolls of tape you buy at the store.

The final coating -- the release -- emphasizes an interesting distinction in the world of stickiness: adhesion versus cohesion. In adhesion, one type of molecule is sticking to another type of molecule; in cohesion, one type of molecule is sticking to itself. Tape uses both [source: Scientific American]. The molecules of the adhesive stick to the molecules of the substrate, or adhere, but they also stick to each other, or cohere. If this weren't the case, the adhesive substance wouldn't hold together. The release coating prevents cohesion at the surface of the tape so it can be unrolled easily.

And so, what began as masking tape and some very happy auto painters is now an industry unto itself. Adhesive tapes have wrapped the metal skeletons of blimps to prevent corrosion. They've insulated at least one lunar lander and helped Apollo 11 astronauts carry out some on-the-moon repairs to their lunar module's fender [sources: ACS, NASA]. They hold rearview mirrors onto cars and keep millions of scrapbookers from tearing their hair out when their placement is a millimeter off [source: 3M].

Pressure-sensitive adhesives even give us Post-It notes. It's not running water. But it's close.

In searching for more information about the tape used by NASA to insulate a lunar lander (specially developed for the purpose, with the ability to remain sticky through an enormous temperature range), I also found pictures of the Apollo lander patched together with plain old duct tape, and came across an interesting phenomenon: Conspiracy theorists have decided the presence of duct tape on the Apollo lander confirms the moon landing was a hoax.

It's a probably a common viewpoint, that tools we have lying around the house couldn't possibly be used to get men to the moon. And in this case, it was actually just a quick repair to the lander's fender, which fell off during the mission. But duct tape also played a significant role in getting the ill-fated Apollo 13 astronauts back to Earth, and my point is simply this: I learned in my research that adhesive tape was truly a revolutionary development [source: Universe Today]. By all accounts, there's a reason why New York's Museum of Modern art featured sticky tape in an exhibit called "Humble Masterpieces" and Richard Drew was inducted into the National Inventors Hall of Fame.

In defense of pressure-sensitive adhesives, if the moon landing was faked, duct tape probably isn't proof of it.