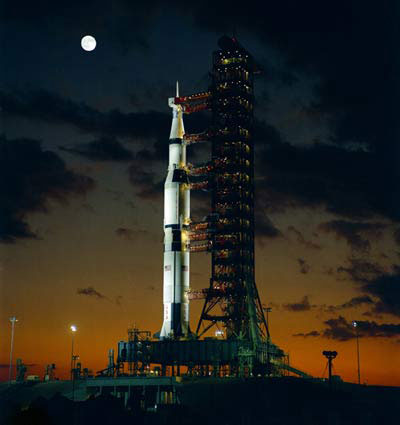 The Apollo 4 spacecraft on top of a Saturn V launch vehicle.
NASA

­It was the 1960s, and the space race was on. In 1957, the Soviet Union built and launched Sputnik, the first man-made satellite. The citizens of the United States were shocked -- the idea that another country would beat the U.S. into space was unthinkable. Moreover, if the Soviet Union could launch a satellite into orbit, could it also fire a missile across the world?

The­ Unit­ed States government acted quickly to reclaim its reputation as the most scientifically advanced country in the world. To that end, in 1961, President John F. Kennedy addressed Congress about the importance of the United States' role in space. In his speech, Kennedy proposed an ambitious goal: landing a man on the moon before the end of the decade [source: Home of Heroes].

The National Aeronautics and Space Administration (NASA), which was formed in 1958, initiated the Apollo program with the intention of landing a man on the moon. From 1961 to 1972, the Apollo Program's mission was to transport astronauts safely to the moon and then return them to Earth. Remarkably, six of the Apollo missions achieved this goal.

NASA developed the Apollo spacecraft with the help of companies like Boeing, North American Rockwell, McDonnell Douglas, IBM and Grumman. Together, they constructed the complex machinery that could transport a small crew to the moon and back again. What was their creation like, and how did it help NASA fulfill Kennedy's promise?

Before we jump into the mechanics of the spacecraft, let's take a look at the history of the program.