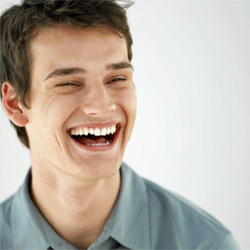 Plenty of inventions out there make us want to crack up.
Stockbyte/Thinkstock

Inventing a useful product or process is serious business. Turn a great idea into a marketable widget, and you could earn millions of dollars. But that doesn't mean your widget has to be straitlaced and conservative. Maybe it has a quirky name or solves a problem we usually make jokes about (like erectile dysfunction, flatulence or halitosis). Take John Abdo. When he first introduced the AB-DOer midsection aerobic machine in 1994, some investors probably snickered. His product had a wacky name, and he had an unusual pitch. One investor, however, was able to look beyond the funny stuff and see the potential. Now, more than 15 years later, Abdo says he's sold more than 3 million units and helped people all over the world get healthy [source: Abdo].

And that's just one invention. Hundreds of seemingly off-the-wall or laughter-inducing products become big hits for their inventors because they're big hits with consumers. On the following pages, we'll look at 10 such inventions. A few are as modern as the mobile phone. Others are as ancient as Aristotle. All of them have made a significant impact on how we live and work.

The popularity of our first invention certainly stuck after its introduction -- can it be found in your toolbox or kitchen drawer?