Even if you wear eyeglasses, your vision is probably good enough that you can recognize the small letters on this page. Text on most computer screens is about 3 millimeters tall and 2 mm wide (.12 x .08 inches). As you read this one sentence, you are probably oblivious to the thousands of pieces of visual information that your eyes are gathering each second. Just in the retina alone, there are millions of cells at work right now acting as photoreceptors reacting to light, similar to how a camera works to capture images on film.

The retina is a thin layer of neural tissue that lines the back wall inside the eye. Some of these cells act to receive light, while others interpret the information and send messages to the brain through the optic nerve. This is part of the process that enables you to see. In damaged or dysfunctional retinas, the photoreceptors stop working, causing blindness. By some estimates, there are more than 10 million people worldwide affected by retinal diseases that lead to loss of vision.

Until now, those who lost their vision to retinal disease would have had little hope of regaining it. But technological breakthroughs could soon give back the gift of sight. Several groups of scientists have already developed silicon microchips that can create artificial vision. In this article, we will examine how your retinas work and why blindness caused by retinal disease no longer means the loss of vision.

How Your Retina Works

The eye is one of the most amazing organs in the body. To understand how artificial vision is created, it's important to know about the important role that the retina plays in how you see. Here is a simple explanation of what happens when you look at an object:

The retina is complex in itself. This thin membrane at the back of the eye is a vital part of your ability to see. Its main function is to receive and transmit images to the brain. These are the three main types of cells in the eye that help perform this function:

There are about 125 million rods and cones within the retina that act as the eye's photoreceptors. Rods are the most numerous of the two photoreceptors, outnumbering cones 18 to 1. Rods are able to function in low light (they can detect a single photon) and can create black-and-white images without much light. When enough light is available, cones give us the ability to see color and detail of objects. Cones are responsible for allowing you to read this article, because they allow us to see at a high resolution.

Click the play button to see what happens when light strikes the eye.

There are a number of retinal diseases that attack these cells, which can lead to blindness. The most notable of these diseases are retinitis pigmentosa and age-related macular degeneration. Both of these diseases attack the retina, rendering the rods and cones inoperative, causing either loss of peripheral vision or total blindness. However, it's been found that neither of these retinal diseases affect the ganglion cells or the optic nerve. This means that if scientists can develop artificial cones and rods, information could still be sent to the brain for interpretation.

The current path that scientists are taking to create artificial vision received a jolt in 1988, when Dr. Mark Humayun demonstrated that a blind person could be made to see light by stimulating the nerve ganglia behind the retina with an electrical current. This test proved that the nerves behind the retina still functioned even when the retina had degenerated. Based on this information, scientists set out to create a device that could translate images and electrical pulses that could restore vision.

Today, such a device is very close to becoming available to the millions of people who have lost their vision to retinal disease. The artificial silicon retina (ASR), developed by Optobionics, which was in FDA clinical trials as of late 2007, improved vision in 10 subjects over a period of two years [source: Groves]. As of late 2007, however, Optobionics was in bankruptcy and awaiting a buyer, which would allow the trials to continue.

As you can see in the picture at the top of this page, the ASR is an extremely tiny device, smaller than the surface of a pencil eraser. It has a diameter of just 2 mm (.078 inch) and is thinner than a human hair. There is good reason for its microscopic size. In order for an artificial retina to work it has to be small enough so that doctors can transplant it in the eye without damaging the other structures within the eye.

The most significant development in artifical retina research has been the Department of Energy's creation of the Artificial Retina Project, which is led by Mark Humayun. The ARP is a group of public and private companies, universities and research labs that has pooled their efforts to perfect a nano-size device. Since 2002, six blind volunteers have been fitted with the device, which has been successful in helping them perceive light and dark and large objects. The ARP also has two more devices in testing.

How the Artificial Silicon Retina Works

The ASR contains about 3,500 microscopic solar cells that are able to convert light into electrical pulses, mimicking the function of cones and rods. To implant this device into the eye, surgeons make three tiny incisions no larger than the diameter of a needle in the white part of the eye. Through these incisions, the surgeons introduce a miniature cutting and vacuuming device that removes the gel in the middle of the eye and replaces it with saline. Next, a pinpoint opening is made in the retina through which they inject fluid to lift up a portion of the retina from the back of the eye, which creates a small pocket in the subretinal space for the device to fit in. The retina is then resealed over the ASR.

For any microchip to work it needs power, and the amazing thing about the ASR is that it receives all of its needed power from the light entering the eye. As you learned before, light that enters the eye is directed at the retina. This means that with the ASR implant in place behind the retina, it receives all of the light entering the eye. This solar energy eliminates the need for any wires, batteries or other secondary devices to supply power.

Another microchip device that would restore partial vision is currently in development by a team of researchers from Johns Hopkins University, North Carolina State University and the University of North Carolina-Chapel Hill. Called the artificial retina component chip (ARCC), this device is quite similar to the ASR. Both are made of silicon and both are powered by solar energy. The ARCC is also a very small device measuring 2 mm square with a thickness of .02 mm (.00078 inch). There are significant differences between the devices, however.

Unlike the ASR, which is placed between layers of retinal tissue, the ARCC is placed on top of the retina. Because it is so thin, light entering the eye is allowed to pass through the device to strike the photosensors on the back of the chip. However, this light is not the power source for the ARCC. Instead, a secondary device attached to a pair of eyeglasses directs a laser at the chip's solar cells to provide power. The laser would have to be powered by a small battery pack.

According to researchers, the ARCC will give blind patients the ability to see 10 by 10 pixel images, which is about the size of a single letter on this page. However, researchers have said that they could eventually develop a version of the chip that would allow 250 by 250 pixel array, which would allow those who were once blind to read a newspaper.

To learn more about artificial vision, take a look at the links on the next page. 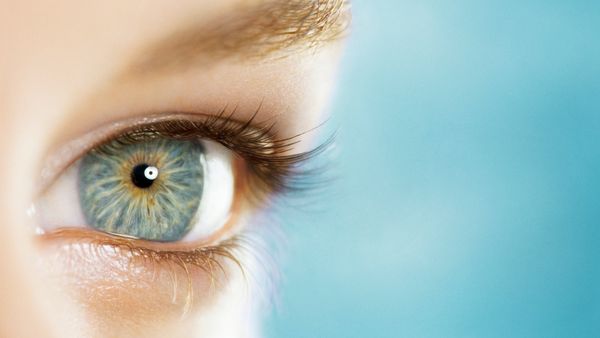